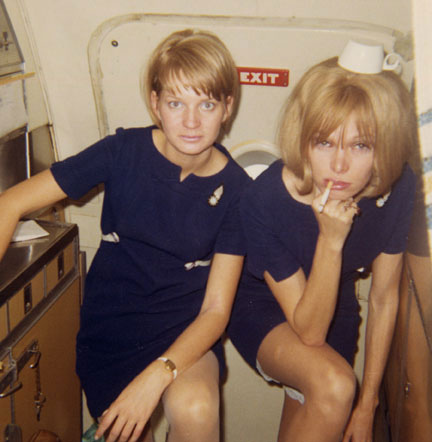 Pic: There was a baby on their last flight. You can tell.

Last week my husband and I became those people. I know I keep referring to the fact that I’m turning into one of them. I think that’s just code for becoming parental units in general. Still, I’m a little in denial. Sure, it’s been 9 months of pregnancy and 16 weeks of baby wrangling but I’m a bit slow, OK? I can’t have gone to the dark side, surely?!

So who are those people that I am referring to specifically in this post? Well, my husband and I became the people we used to groan at. The people we would roll our eyes at. Criticise. Jump to conclusions about. Yes. We became The People With A Baby On An Aeroplane. Which, in our defence seems to be a little better than being The People With a Toddler on an Aeroplane…but that’s probably just another story from the future that is yet to happen.

We were taking the Little Mister over to Tasmania to meet my relatives (yes – make all the incest jokes you like – I’ve heard them all). This involved a 3-4 hour flight to Melbourne, followed by an hour’s flight to Hobart. I woke up at the crack of dawn (who am I kidding – I wasn’t asleep) and packed and repacked as many things as I could…so basically ten times more stuff for the baby than for me. iPod, novel, journal in the hand luggage? Pfft! As if! It was now the Little Mister’s favourite (non noisy) toys, musulin wraps (for wiping up drool and other fun stuff), spare outfits, nappies, bottles, wipes blah blah blah!

We made it to the airport with plenty of time to spare, sharing nervous smiles with anyone else we saw who was clearly about to fly for the first time with their babies too.

Let me tell you, the moment we found our seats (front row of economy) on the plane we saw the “awww nooooo – it’s a damn baby” faces people were making. Which I thought was pretty rude of the guy who was sitting in our row (there was a fold down baby bassinet in front of him – what did he expect)!

I think I spent more time worrying about what other people would think when they saw our baby on the plane than about his actual behaviour (which didn’t turn out to be so bad). I found myself fantasising about getting a hold of the flight attendants’ loudspeaker microphone thingy and making an announcement: “Um, excuse me. I’m the mother of that adorable but unpredictable little baby boy you see there. I would like to let you know in advance that I am sorry for any loud crying or tantrums that may transpire. Also, just so you know, not very long ago I too was like you and so I know more than anything how annoying a baby can be on a plane. I am one of you, so please for the love of god don’t turn on us! Thankyou very much. Enjoy your flight. Don’t hate me. Love you.”

Turns out our baby doesn’t like sitting and waiting. Apparently it’s boring. So he’d cry before the plane started to move (not too much but just enough to make everyone around us wonder what kind of hellish flight they were in for), but settle as soon as he was having a feed on the way up (to help his ears adjust to the change of air pressure). He was so good and he’d nap in my arms after a suck of his dummy and some (space limited) swaying. While he napped I managed to catch quite a few episodes of that show Up All Night – it stars Christina Applegate and Will Arnet as new parents adjusting to having a baby in their lives…let’s just say it struck a chord. My husband would glance over at my screen occasionally and question why the hell I would take a break from dealing with a baby, by watching a show about dealing with a baby. Good question! 😛
He shouldn’t have made fun though. He had to keep stopping and starting Moneyball (he’s a sucker for a sports related movie) to help with the Little Mister and five minutes before the movie ended he was told to shut it down because we were landing – sucked in! Just kidding, that would have been pretty annoying!

Anyhow, I was feeling pretty good after surviving the first leg of our journey to Melbourne – even if I’d had to rush the Little Mister to the toilets to change him after what can only be described as a nappy explosion! It was so crazy. He peed on himself as well, which was a little inconvenient while I wiped his bottom! So no-one told me that I was walking around Melbourne airport with poo splatters on my top…I realised just before we had to check in for our Hobart flight and admonished my husband for not noticing and alerting me, zipped out of the queue (which was taking forever anyway), located the key to my suitcase which was hidden in my hand luggage, dived in and found a replacement top just in the nick of time. Wow. I have now done it. I’ve walked around oblivious to poo being on myself. In public. ONE OF THEM. I’ve been initiated.

Side note: While watching Sex and the City with my girlfriends the other day, the episode where Miranda gets Brady’s poo on her while changing his nappy came on. My friends (who do not have babies – yet) were all like, “Pfft. As if you wouldn’t know you had a big lump of poo on your head!”
I set them straight – don’t you worry. I then worried that my baby was also watching Sex and the City (despite my best efforts to distract him) and that he’d clocked up 4 sexy love scenes in a matter of minutes of viewing. Parent fail!

Anyway, the rest of our plane travels played out in a fairly similar fashion (minus a repeat of the aforementioned ninja poo attack – I should have said yes when security asked if I was carrying anything explosive). I now feel this immense level of pride. I took my three and a half month old baby on a plane journey and survived (and was even brave enough to get on the plane for the return journey instead of deciding that I might just live in Tasmania rather than go through that stress again which was what I feared would happen). I am brave. I am awesome. I DID IT (well my husband helped a lot too haha)!

My short but sweet tips (for Aussie domestic flights) would be:

– Use a nappy bag as carry on in and of itself. So easy to take the whole bag to the toilet/change area with you when required, as opposed to juggling it around, zipping and unzipping it, looking for nappies and wipes etc in front of everyone. You can just get to the privacy of the change room and take your time figuring it out. Have a spare outfit for bub and one for yourself in there!

– Have pre-packed formula and sterilised bottles with boiled water in them handy for onboard feeds. If your baby is happy with room temperature feeds (instead of warmed ones) then it’s so easy to prepare. We found that despite popular rumours, the attendants can’t really warm your pre-mixed, refrigerated bottles for you very well on the plane. We will no longer be dummies and I have purchased fantastic formula containers that store three measured out feeds and have a handy spout thingy for easy transferring to a bottle. All you experienced parents/travellers are probably laughing at me right now 😛 Don’t worry – lesson learnt!

– Baby Bjorn it up. If you have a carrier you can wear through the airport, your hands are free to pull your suitcases around, your bub feels cosy and comforted in a strange place (against your chest) and if you’ve checked a pram in as cargo then it will serve you well until you can collect it again (we were lucky and borrowed a pusher from relatives while we were there).

– Pack way more sterilised/clean dummies than you think you’ll need on the flight. At one time we went through three in a matter of minutes. The baby can spit it out and it hits the ground easily!

Now I am home and I might need to sleep for a week to make up for our eventful holiday, but it was worth it. My grandparents (great grandparents for the first time) were able to meet my little man and it was so touching to see my grandfather (who suffers from Alzheimers) so excited to see a little baby in the family – even if he didn’t quite remember us 🙂

What people do you hate sharing a flight with? Any horror stories about babies/toddlers on your flights? Any tips for travelling with babies?