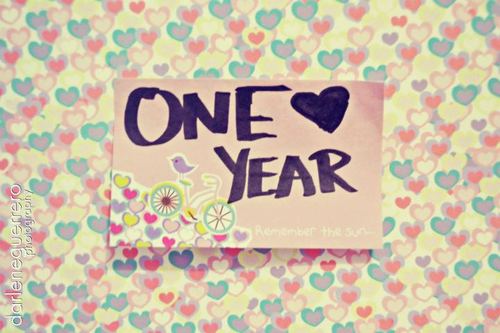 In another week, I will have been a parent for a whole entire year. It’s nuts. I have no idea what’s happened. Seriously, what just happened??

In some ways it feels like it’s been a decade, and in other ways it feels like it’s been, oh…about 30 seconds. Blink and you miss it. That kind of feeling. I just don’t understand how it’s actually possible to fit that much craziness into only a year! 12 months of everything from taking a brand new baby home from hospital, to watching him grow and develop into an almost toddler and worrying about every little thing in between!

OK, so I’ll get the mushy one out of the way. I was not prepared for the ridiculous love that I would feel for my own offspring. I mean, you hear about it, read about it and have an understanding or imagining of what it might be like, but until it happens, you can never really know it. At least it was like that for me. I would do anything to protect my Little Mister. I have become like a fierce mama *insert powerful beast/dinosaur/thing you saw in a movie of your choosing here* and I am constantly surprised by the things that make me feel brave and courageous when it comes to doing right by my Little Mister. Of course, with this ridiculous baby love comes the hot mess that is me every time I see a news story about babies. Also any movie about babies. Any documentary about babies. Any picture of a baby. Basically anything that seems like it could be to do with babies. It can be happy stuff or it can be sad stuff. It can be ANYTHING and suddenly I have tears in my eyes and I’m doing that snotty blubbery thing. I now know what people mean when they say that their love for their child gets them through something. When something happens to a child that is a parent’s worst nightmare, I actually truly understand how horrific that really is. Don’t even get me started on the starving children of the world or I might not be able to finish this blog post.

I’ll be honest. Before I was pregnant and even during, I scoffed at the idea that mums can get all clucky when their first child grows out of infanthood. I thought, really?! Why would you want to go back to that whole crazy stage of life? Why are you looking back wistfully?? Do you really remember how crazy that time of life was?! Don’t you want your child to grow up and be a great, healthy, independent being?? But now that the Little Mister is almost one year old, I kind of understand it. I guess that’s how second, third, and nineteenth kids are conceived. Don’t worry, everyone. I’m not that clucky yet – I have a lot of stuff to forget before I can go there again! I just now realise that as my little baby gets bigger, smarter and is even almost walking, he’s going to soon just look like any other grotty kid on the playground instead of my beautiful, sweet smelling fluffy haired cuddle bug – although, he’ll be my beautiful grotty kid. So, I admit it. I get it now. Geez! In saying that, I am so excited for what the future brings (even if it sometimes scares the living daylights out of me)!

I’m not as cool as I thought I would be. There. I said it. I always pictured myself as being a really responsible, good parent (able to do both discipline and fun) who just also happened to be super awesomely cool too. Like, I thought I would wear really awesome clothes and not really change a thing once the Little Mister popped out. While I do play him great music and I haven’t turned into a Stepford wife/mum (well there was little chance of that haha), I do dress differently. I do drive a station wagon style vehicle (you’ll find that calling it a sports wagon and putting cool stickers on it doesn’t really disguise it at all but keep telling yourself that – I’m just a whisker away from having those awful stick figure families stuck to the back window). I don’t wear short skirts, bikinis, or show off my cleavage (what’s left of it). The sad truth is that not only has my body changed, but so has my attitude. I’ve become all, “Is that practical?”

Also? Babies cost a lot of money. Not like off the black market, silly. Just to keep one alive and stuff. I mean, I knew that having a baby would be a bit expensive. I was the one lecturing my husband on the realities of what we were in for. Turns out I was slightly ignorant. I mean, just like that whole “love for your child” thing I described earlier, there’s a difference between knowing what to expect and actually living it! Therefore, my cool factor is suffering because I can’t buy many new clothes (had to have a ridiculous purging of my ‘stuff that no longer fits’) and I can’t buy ALL OF THE iTUNES. Yeah, my definition of ‘cool’ isn’t even that cool anymore – what, fool? You think being cool is just music and clothes? How pedestrian. Hipsters be hatin’.

If you are just you, or just you and a plus one at this point…imagine how outraged you are when you buy two puny bags of groceries at the supermarket and it’s like $50 and you’re like WTF? That’s ridonkulous!! Add a box of disposable nappies ($30) and a tin of formula ($20) almost every time. Then when you’re pregnant and you’re all, “I’m gonna save money and the environment by using cloth nappies and breastfeeding only”…but it doesn’t quite go to plan and your trendy, expensive (at least for initial outlay) cloth nappies sit unused because you were too scared to use them, plus the breastfeeding thing didn’t quite work out…I mean, not that I’m talking about me here…OK I am. Yeah, you get where I’m going with that.

My husband and I now have a strict budget for each pay fortnight, which we routinely break, but we do it with an educated mind at least? The damage we inflict on our cards is much less (I feel) than it would have been before we started planning better. Yep. I never thought I would actually have to account for every single last cent. Literally. I mean, I was always frugal and very sensible before, but now I have a new meaning for ‘sensible’ and it doesn’t always include a copy of TV Week or a sneaky item of clothing here and there!

I still swear a lot. Seriously. I thought about implementing a swear jar in our house, but then realised I would just swear more because the Little Mister would be receiving the money. You know, for a good cause and all that. So, I’m still working on it. I had no idea how much I don’t give a ship about some things, and how other things can get firetrucked. I really need to be better. Parent fail.

A few years ago, if you were to tell me that you had this great job opportunity for me: It involves very little sleep for a few months, you’re on call 24 hours a day, you will have to pay your own way (ie it’s volunteer work), and it’s messy. Basically, you’ll be wiping someone’s poo and vomit up – for no pay. Daily. Relentlessly. No sick leave. No entitlements. No annual leave. Your employer can’t speak your language, will yell a lot to get what they want and won’t even smile at you for the first six weeks. Also, it will be the most happy time of your life.

I would have thought you were batsh*t crazy.

But it happened. I love it. Sure, occasionally I love it a little less than usual…but I wouldn’t trade this job for the world. I really really hoped I would feel this way when I eventually had a child, but to see that it has become my reality thrills me.

It’s been one year and I am (just to toot my own horn) really amazed at what I’m capable of as a parent and as a person. Having the Little Mister has shown me what I’m made of and I have realised I don’t mind what I’m made of at all. I mean, none of us are perfect, but I feel so happy to know I really am strong and able to love so much. I can’t wait for the many years ahead as we learn and grow together.

Here’s to a year of parenting 🙂

To see what else I’ve written to celebrate a year of the Little Mister, click here 🙂 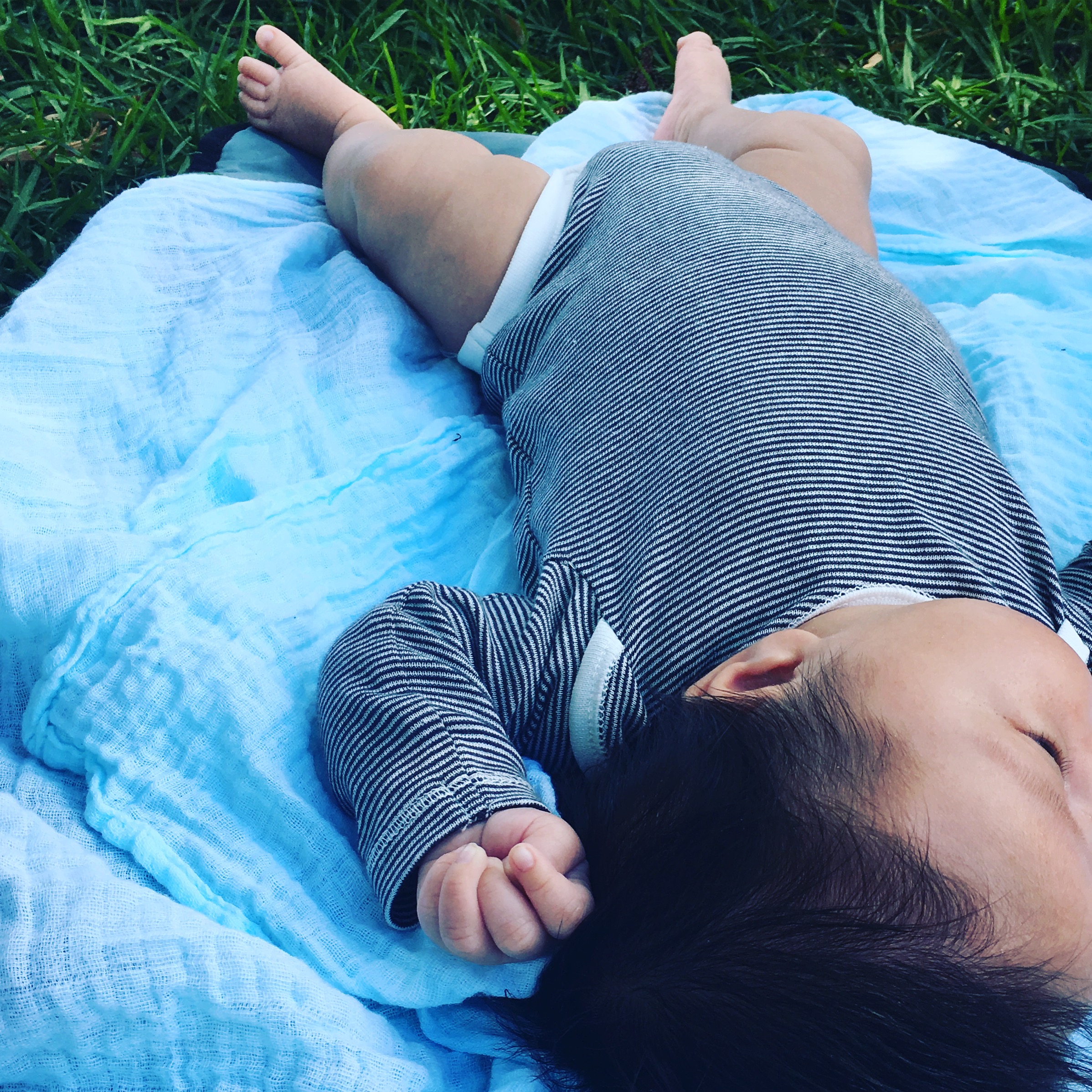