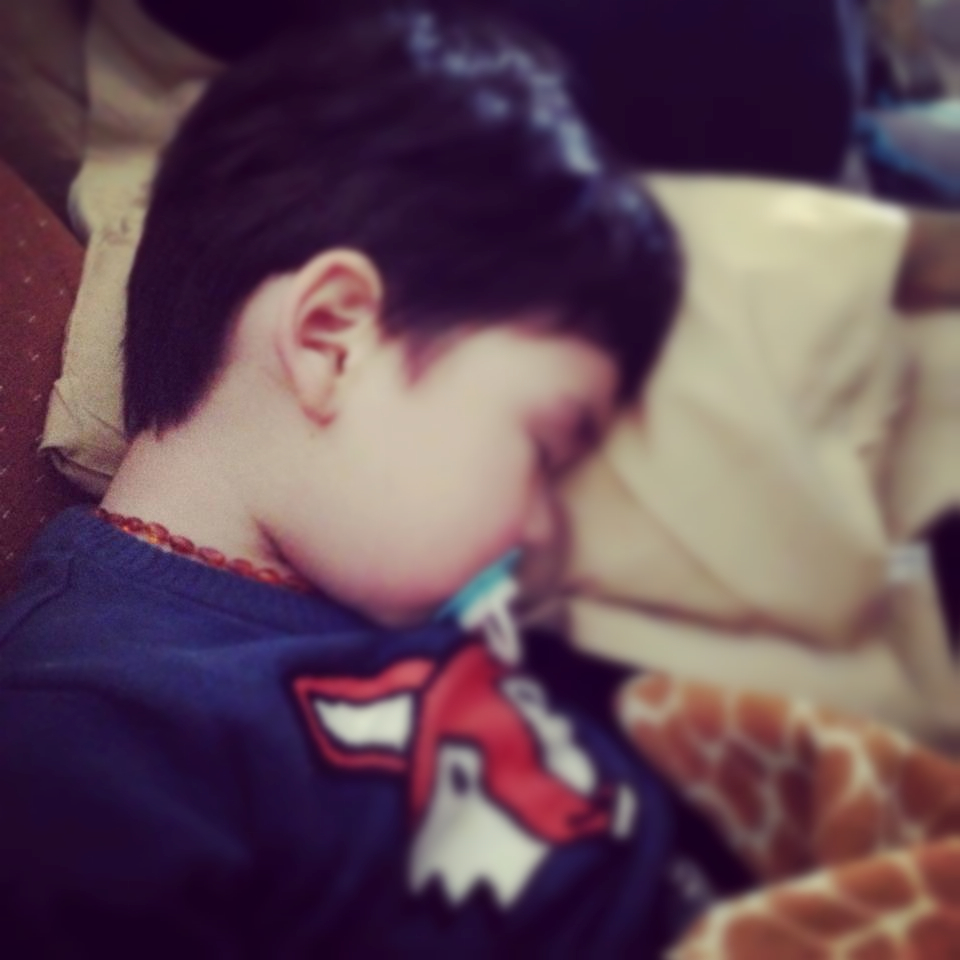 A wonderful fact about the Little Mister is that he flies really really well. He is a dream. A quiet, well behaved little angel (if a bit chatty). In 4 out of the 5 flights we took during our trip, he was amazing (and he also has been when he travelled at 18 months and 3 months of age). I have to pinch myself every time – I take nothing for granted. Yes… only 4 out of 5 this time around, but to be fair, the one where he wasn’t so much of a dream was the very last one home and he had a whole month of crazy accumulated in his tired little body and brain. And perhaps it wasn’t so bad, because if he was ruining anyone’s flight it was mostly ours haha.

The Little Mister loved seeing the little screens in the back of the plane seats. He was happy to watch anything designed for little ones…without the earphones on. Apparently the inconvenience of having earphones on your head wasn’t worth having sound. Same went for the iPad (which was loaded with his favourite TV shows and some great learning apps). Hell, we didn’t care as long as he was happy with his decision! Perhaps he could have stayed entertained for a bit longer had he experienced the joy of audio, but each to their own? The Little Mister loved having his special kids meals and the fact that they always came along with his little tray of goodies at just the right moment was just wonderful. Seriously, you should see the cool stuff they get. I was jealous. There was this one dessert…OK, snap out of it, Kez. Where were we?

Another thing I would like to add is that the Little Mister likes boundaries and the psychological boundary of having a seatbelt did wonders for him on our holiday. If he was strapped anywhere (planes, taxis etc) he felt secure, safe and grown up – not caring to break out and run amok. Gosh I loved the fact that planes have seat belts.

Four times out of five, the Little Mister slept at some point while flying. Heaven. We could finish watching movies of our own without having to pause anything and once I even caught a nap of my own! Turns out ‘sleep while they’re sleeping’ is easily applied on a plane! The best sleep he had was from Incheon (Seoul, Korea) to Narita (Tokyo, Japan). It was amazing. His meal arrived early, he ate half of it quietly, then slept the rest of the way! Yippee! I felt almost guilty for disappointing the dude in front wearing the stripy shirt who was shooting dirty looks at us before we took off. He was so determined for the Little Mister to be a little turdburger and I felt like we’d let him down. SUCK IT, STRIPY SHIRT GUY. Yes. I felt smug for five minutes. I admit it.

While I often feel guilty in those moments when the Little Mister is actually a bit of a butthead on a flight, I also think I get to a point of not caring anymore what other people might be thinking, because we’re in survival mode and I figure we’re having a tougher time anyway, because we don’t get to walk off the flight and leave his hot mess behind haha. Kidding. Kind of.

It helped that on our last flight (that dreadful one out of five) there were a few other toddlers, so if it wasn’t our kid ruining the flying experience for someone, it was definitely a bunch of others. I think they made a very effective team :/

In all seriousness, I think that most other passengers took pity on us and those who might have been a bit annoyed would do best to invest in some noise cancelling ear phones – they do wonders (in all fairness I didn’t notice anyone being particularly huffy about it and I was grateful). Also, I think people are kinder when they see that you are a parent who is trying their hardest to show consideration to the other passengers. I remember before I had the Little Mister, I mostly got annoyed at the parents who didn’t even raise an eyebrow at their toddlers when they kicked the seats in front or yelled and misbehaved. The ones who were trying and seemed to give a crap got nothing but my empathy, regardless of their child’s behaviour.

The Little Mister received celebrity service from the flight attendants on that not-so-relaxing last flight home (with Singapore Airlines), which was so lovely of them. They gave him cuddles, walked him around and even took him away to give him ice cream and other goodies. I think he even fell in love a couple of times. OK, so the ice cream and the adoring attention might have hyped him up more, but they meant well and they were so kind to give us small breaks. I highly recommend them as a carrier worth splurging on if you have the means (or the ability to streeeeetch things).

When I think about what we achieved, travelling by plane, train (that’s a whole other story!), tram, bus, boat and taxi, I am quite proud of us all for being so brave. It was not always smooth sailing, but we survived every step of the way and we lived to tell the tale! I feel like we could do almost anything now!

I must also let you know that if you are a traveller without children, fear us no more. We are retiring from the flying game for a while. The Little Mister has a bunch of impressive new stamps in his passport and we are taking a hiatus until he’s a bit older and easier to travel overseas with! Famous last words…? 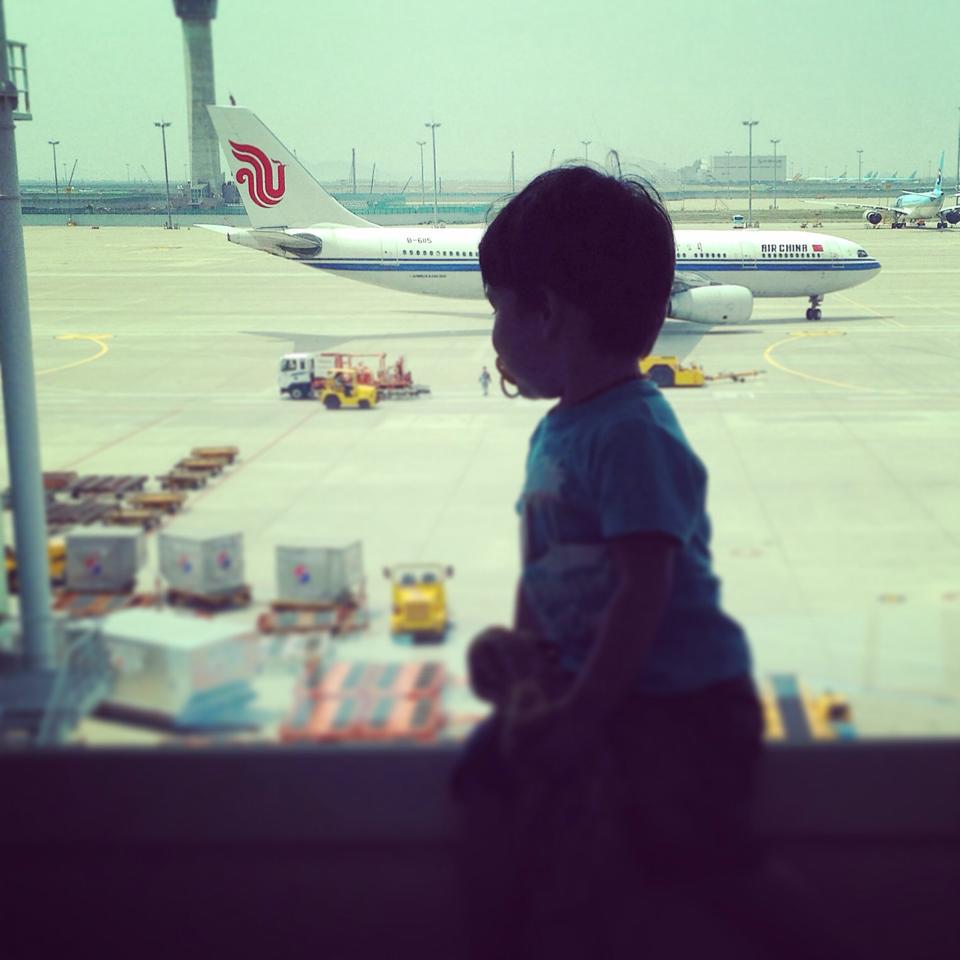 Have you ever flown with a toddler? How was it? Do you have any questions? x

Other posts about our holiday: