We couldn’t go anywhere without people chasing us down, trying to get a look at him. Cameras flashing, people gushing, gifts being bestowed at every turn. Cries of “OH SO CUTE!” in English everywhere we turned. School girls giggling and pointing.

Look, I know the Little Mister has been the star of my blog, but no – he isn’t actually famous. Which is just how I like it.

In Korea, it was the whole celebrity experience. I had heard rumblings before we went that the Koreans love children. I had also learnt that they also got extra special attention if they are Eurasian or Caucasian. So we had some kind of sense that the Little Mister might get showered with a bit of love. I just had no idea how much!

The first real clue we had was our first sight seeing day in Seoul. We had been visiting the Gyeongbokgung palace and its amazing, green, sprawling grounds. We made a quick stop to walk through the museum there and after we’d done our rounds, I ducked off to the loos for five minutes while Mr Unprepared waited outside with the Little Mister strapped into his bright yellow stroller. FIVE MINUTES.

I walked out, expecting to have to search out my husband and my parents in the busy swarm of people at the entrance. It didn’t take long for my eyes to hone in on my dad. He was slightly taller than a lot of the people, with his blue and white plaid shirt and grey hair (haha sorry). I then saw a bunch of women. All dressed in really bright colours. Laughing with Dad. I was intrigued. Then I saw Mr Unprepared completely surrounded by them. As I focused in, I saw the Little Mister too. Oooooooooh shit. The women were taking photos. They were crowding in for photos with him and they were getting more and more excitable! The Little Mister looked a little baffled but he took it in his stride and giggled a bit at the craziness. I’m sure the women seemed quite amusing. I exchanged glances with Mr Unprepared and we both had “WTF” facial expressions to match! At one point it got too much. The Little Mister started to look a little bit freaked out – it wasn’t fun anymore. Then one lady tried to take him out of the stroller, pulling at him without realising he had harnesses over his shoulders. The mama and papa bear in us took over and Mr Unprepared did his best celebrity bodyguard impression, literally lifting the Little Mister up, stroller and all (wheeling him around them would have just been impossible) and using his, “I’m goddamn serious” voice to tell them “THAT’S ENOUGH.”

To be fair, I do not think these women were actually from Korea, but their behaviour was not unlike much of the attention the Little Mister continued to receive from the locals throughout our trip! 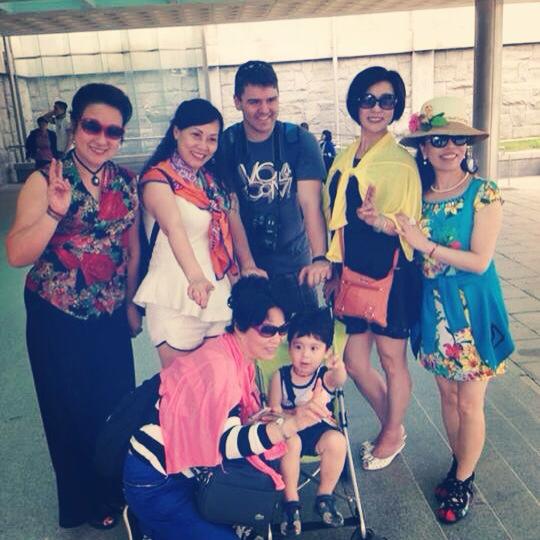 This photo was taken before it all got cray cray. It turned out that this would happen each time Mr Unprepared took the Little Mister anywhere without me. Somehow it made them an irresistible pair. I don’t normally show the Little Mister’s face on this blog, but now his photo is on these ladies’ cameras who-knows-where, so like any good celebrity parent (this is a joke – calm down), I will leak it before they do? 😛

The Little Mister was given a lot of love throughout the trip and the Korean people were very lovely in the fact that they wanted to help the Little Mister whenever they could. If he was a bit scratchy on the subway trains, he’d get handed lollies and treats. Other than one not so wonderful train ride in the countryside, he was never judged by strangers, that we could tell (which made me realise just how awful and judgy we are at home). If he wasn’t being his best Little Mister, people would be sympathetic. He’d be talked to in Korean constantly (which absolutely baffled him the first few days – his reaction was priceless). People would offer him their seats everywhere we travelled – at one point he was squished between two older ladies on a bus because it was a bumpy ride and there were no spare seats. He’d be babysat in restaurants. His photo was constantly taken (a little unnerving but we really couldn’t control it all). People would gasp and giggle when they saw him. They would go out of their way to look. Some would race ahead of the stroller while we were walking so they could grab a glance. Then when we got ahead of them, they’d run ahead again. Mr Unprepared reported that one time (when I wasn’t there – of course) a person did this running ahead thing at least 3 times before leaving them alone!!

Of course this attention started to go to the Little Mister’s head. He was easily hyped up by the crazy attention and thought that every person he ever saw would love him instantly. He’d see a group of young women (his biggest demographic) and put on his most charming face, clearly waiting for them to fuss over him. This was a bit of a problem by the end of the Korean leg of our trip, because the Little Mister found it increasingly harder to just zone out and have a nap or some quiet time while we were on the move. This meant he was more hyped, more used to constant attention (and more demanding for it), over tired and a lot harder to handle. There was nothing we could do about it unless we wanted to sit in our hotel room all day (and even then we knew he wouldn’t nap because our only chance of him having a day sleep was if we were on the move with the stroller – dilemma).

Sometimes people even tried to wake him and talk to him when we did manage to get him to sleep!!!!

I can’t really let this post go by without mentioning my mum’s big moment in Gangneung (the place my brother was born) …a man was being friendly, obviously intrigued by my parents’ white appearance. When he found out they were Australian, he grabbed my mum in a massive bear hug and tried to kiss her all over her face!!! EEEEEEK! This was not so much of a cultural clash so much as we suspect he was a little bit mentally…off.

While I feel that the attention showered on the Little Mister was simply a cultural difference, we did start to feel like we needed some kind of personal bubble for the Little Mister (and perhaps by default the rest of us) by the end of the two weeks in Korea. Social boundary expectations just weren’t the same as we experience them here in Australia!

I think that having the Little Mister with us on this journey definitely offered us a unique experience – one we wouldn’t have had an insight into if we had gone before he was born or if we’d left him at home (which we could never ever do). While it certainly had its challenges, we really learned a lot about the people of Korea and had a lot of interactions with them that we might not have otherwise had. It really clarified some personal thoughts for me too on being adopted etc (but that might be another story).

Have you ever had this kind of celebrity child treatment overseas?

You might enjoy these other posts about our trip: