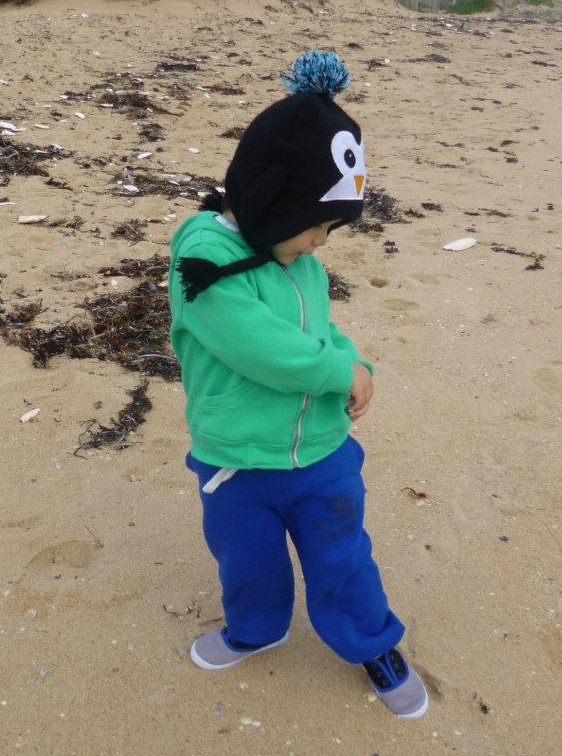 filling his pockets with shells

Something has happened in the last week or two. Suddenly I realise that my (mostly) terrific two year old is almost three. In three months he will be three years old. That is just positively ancient and very very grown up. I don’t know if I’m ready! I’ve been watching as the baby section of each store I visit becomes a more distant experience (apart from the times I buy gifts for the massive baby boom my friends are having). The toddler section seems to blur into the ‘big boy’ stuff. The Little Mister is getting a big boy room soon (it’s half done). With full sized furniture. No cot/toddler bed. No change table. No port-a-cot shoved in the cupboard. NO NURSERY.

It feels like overnight he has become this new little person. He’s still got the same gorgeous soul he’s had since he was born, but he won’t let me do anything. Won’t let me put him in the car seat. Won’t let me lift him into, or out of, the car. Won’t sit in a stroller (he’s getting so big for it that he can ‘brake’ it by planting his feet firmly into the ground). Won’t hold my hand when we’re out (or even let me touch him or imply in the slightest that I am somehow assisting him in any way). Which makes for great car park arguments. Safety is not a toddler’s priority.

He wants me to read him his bedtime stories over and over for infinity so he won’t have to go to sleep (luckily he does most nights). He tells me when I’m wrong (even if I’m right).

Getting him ready to leave home is quite time consuming. It involves a lot of chasing, firm words (both of ours), grovelling on the ground (both of us), trickery (both of ours) and patience. Shoes and socks? That takes a while. Typically it goes like this:

Me: Time to put on our shoes and socks! Can you sit down so I can help you, please?

He gets distracted by something. Runs away all cheeky like. Sometimes grovels on the floor underneath the chair in his room. Sits on the chair…facing the wrong way. I attempt to put one of his socks on backwards. He then gets off the chair, grovels around a bit, gets distracted. Repeat for the second sock. He runs off before I can put his first shoe on. Comes back because he realises he is “needing shoes” (he knows shoes mean he gets to go out and do fun stuff). Insists on putting on the shoe by himself. Bats my hand away.

“Little Mister do it!”

Decides that putting his own shoe on is too hard. Asks me to do it. So I do. I deftly apply the second shoe while he’s already making a move for it. If I’m lucky.

So if that’s just shoes? Imagine everything else!

The Little Mister refuses to leave home without his car keys. A big, colourful toy set of keys designed for babies (he doesn’t have to know that). He wants to be like me, because I always grab my keys on the way out of the house. Cue meltdown if he’s misplaced them and we are running out of time to be somewhere! When we get home he insists on taking off his shoes and lining them up on the garage step next to Mr Unprepared’s old work boots. He’ll scrunch up his socks and shove one in each shoe. Just like Daddy.

The Little Mister’s imagination has just suddenly become so huuuuuuge. He sees things that the boring adult cannot see. The bubbles in his bath become Peter Rabbit’s house. Dinosaurs. Cafés with coffee served outside on little tables. Couches. Mummy and Daddy’s house. Trees. Train tunnels. Cars. Boxes and washing baskets become cars for teddy bears and trains. I am always calling teddy bear on his toy phone to come and assist because a train carriage has tipped over. The Little Mister will pick up his Mickey Mouse lunchbox (given to him by flight attendants recently on a flight home from Singapore) and jump into his bubble car to go to ‘work’ just like Daddy.

Some mornings, I’ll have had requests to go to five different places (library, playground, Nana and Poppy’s house, the shops, to see his friends) before we (I) can even wake up properly.

Last night he ran around the house wearing an old lady wig (complete with bun) that he found in my wardrobe, lashings of hot pink lipstick (his insistence – he doesn’t see gender – just bright colours and stuff that one of his favourite big people – yours truly – does), a coral coloured handbag draped over his shoulders, his dad’s old sunnies on (upside down of course) and no pants (par for the course). I think a dress up box will be in order soon. Oh, the pictures I could get for his 21st birthday! The joy!

When we go to playgrounds or peoples’ places, if there is a rideable car, tractor or bike, he is going to hog it and defend it to the death (without adult intervention). He has been learning about sharing, but still doesn’t realise it applies to him. He just thinks everyone else should share. We’re working on it! He’s so sweet, in all other areas of playground matters, though. He says sorry and thank you and please (most of the time). It kind of balances out a lot of the ‘no’s or the NOOOOOOOs or the nopes or the nahs that I get served up daily, anyhow.

He is still a chatterbox (always has been), but now the words he uses are getting clearer and occasionally he’ll come out with some hilarious things. He’s learning how to play games. Hide and seek is the latest.

Hide and seek with the Little Mister:
I have to close my eyes and start counting. He goes and hides in the kitchen (the same place he ‘hides’ every single time). Then he runs out very loudly and conspicuously to find me with an excited grin on his face before I even get to the count of five.
I guess he likes doing both the hiding and the seeking all at once. Funny little man. – Awesomely Unprepared Facebook page.

This latest development spurt has been an adjustment for me too! Each time the Little Mister makes a leap, I am forced to catch up. Fast. From my Facebook page last week:

When the Little Mister has a developmental spurt he is usually a bit more of a handful for a little while until he settles into it and let’s just say that has been the issue most of the week! So I reach Friday night and I am all exhausted but excited to have a nice big sleep and wake up a bit more refreshed. So what do I dream about? I dream that I’m toddler wrangling…how (un)lucky!

I’m getting there. While the Little Mister’s crusade for independence (regardless of whether his current skill set can allow it) is certainly a challenge, even for a saint like me (HA HA HA HA HA), he more than makes up for it with his humour, affection and quirky ways. I love that he has so many awesome ‘firsts’ to experience no matter how grown up he seems.

Goodness knows what is in store when he turns 3 for real.

So, if you’ve had a three year old at any point, what can I expect?