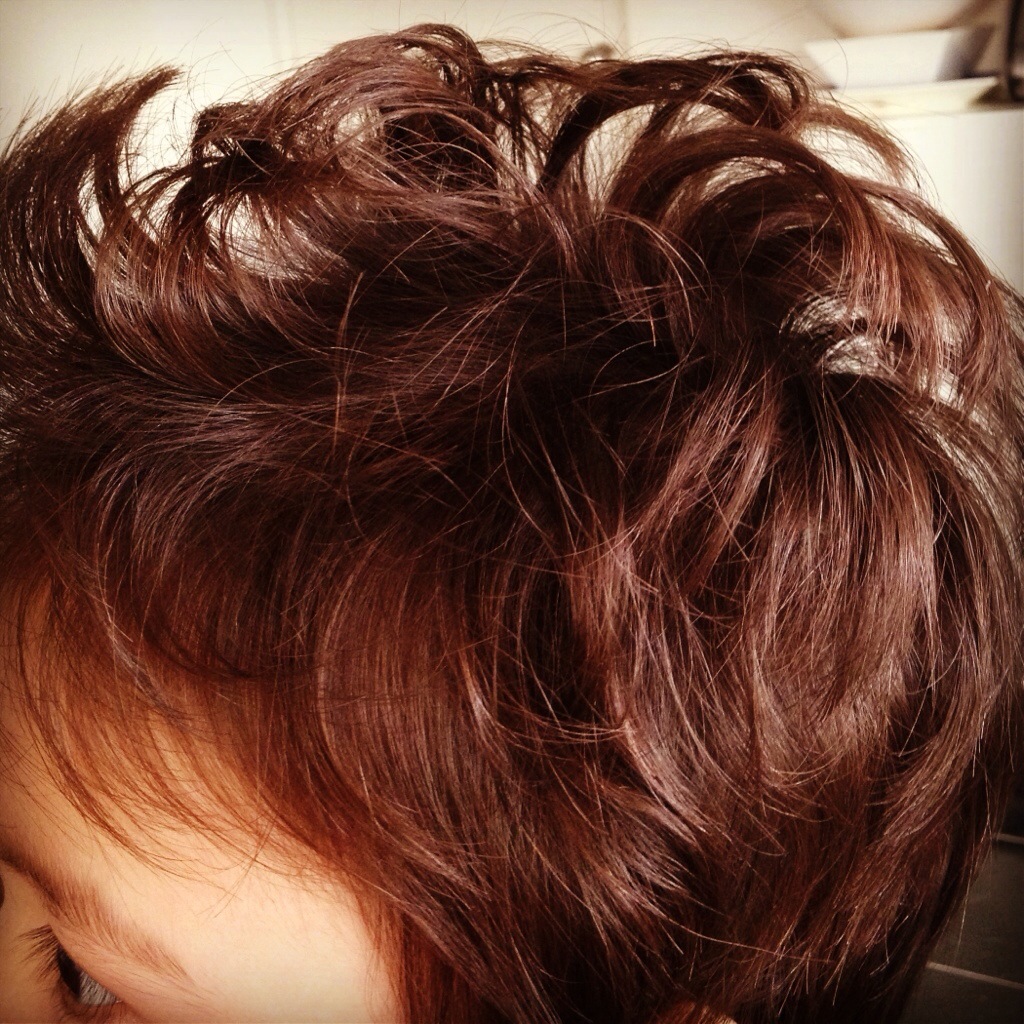 In the 23 months the Little Mister has been on this planet, I swear he’s had more hair appointments than my husband and I combined. See, we did this little genetic experiment. Turns out if you add the genes of two parents with hair that grows fast, you get a child whose hair grows RIDICULOUSLY fast.

Everywhere we go, people are all, “Oh wow! Look at his full head of hair!”

“Look at that hair!”

“Must be time for a hair cut!”

To which I’m constantly replying, “He’s just had one.”

I always know when it’s TIME. His hair starts getting in his eyes and he bats his hands at it all day. He starts to look like a hipster that went too far with the sweeping fringe – like emo too far (I may be confusing my subcultural references in a bizarre way but I don’t know what I’m talking about so excuse me). The back gets long enough to enter mullet territory. His head looks twice its actual size. It’s the last one that freaks me out the most. He’s only got a little toddler body. He starts to look like a bobble head that you keep on your dashboard. Does anyone still do that? With the bobble heads? Anyhoo…

The first time he ever had a salon cut, I’d made a very big mistake and had taken him while he was feeling the effects of having his immunisation needles. The crying and the fear of sharp things ensued (I would have seen that coming had I not been a zombie lady at the time). I was very ill prepared and I left feeling like a terrible mummy and wondered if I had just one of the many children who cannot handle the anxiety of their hair being chopped off bit by bit with scary scissors (which I figure is definitely a rational fear for a little toddler).

Almost a year later, I realise I should not have worried at all about tears and tantrums (well not at the salon anyway – Terrible Almost Twos anyone?). It was the dance breaks, the flirting and the tomfoolery that I should have been ready for!!

I take the Little Mister to the place I get my own hair done. The girls are always friendly, do a great job and it’s a place that the Little Mister is familiar with (he visited before he had his own hair cut and watched my mum getting her hair done so I like to think it helped him to understand what happens there). I always know he’ll be treated well and shown some love (not just chucked in and spat out). Something that’s very important when dealing with little ones! Flattery and a few funny faces will win them over almost every time!

I always try hard to pick my time of day for an appointment wisely! I like early in the morning myself. The Little Mister is fresh and looking for something different to do at that time of day and I know his appointment will be done and dusted long before nap time! I took a risk yesterday and made him an afternoon appointment – not long after nap time, but long before any risk of arsenic hour could set in. I was a bit nervous that he wouldn’t nap beforehand (resulting in me being tempted to cancel), but he came through for me and I let him sleep a little longer than usual just to make sure he’d be super friendly in time for his appointment!

So, we’re doing pretty well with the hair appointments (for) now. The Little Mister is old enough to be distracted (or bribed) and can sit up in the high stool without me panicking (that much) that he’s going to fall off and slam into the floor with one false move. My secret weapon? Toy cars are the flavour of the moment and…a yoghurt squeezie packet that I’ve frozen earlier. He will suck on that forever. Basically, any snack that takes a long time to consume is a good one! Seriously, I could write an entire blog post of its own on the topic of frozen yoghurt squeezies. I’m not even kidding.

We’re now down to only a couple of mid haircut dance breaks as opposed to the previous hundreds (the background music is always awesome at the salon). The Little Mister only needs a hug maybe once during the process (not because he’s distressed but just because he’s feeling the love), and he seems to have passed that stage where he wants to spray his own head with the spray bottle every five seconds.

Also, ladies and gentlemen, I think we have a prankster in progress on our hands.

The Little Mister almost gave the hairdresser a heart attack when he started squealing very loudly (and high pitched too) as she approached the tricky bit around the ears. For a second, we held our breath thinking we were in for a fear induced meltdown. But no. He had a big grin on his face. He was faking it. He was basically taking the p*ss. AND LOVING OUR REACTIONS. He’s seriously lucky he still has ears after that little performance.

Do you have any tips to offer for surviving toddler hair cuts? Do your children love/hate having their hair cut?