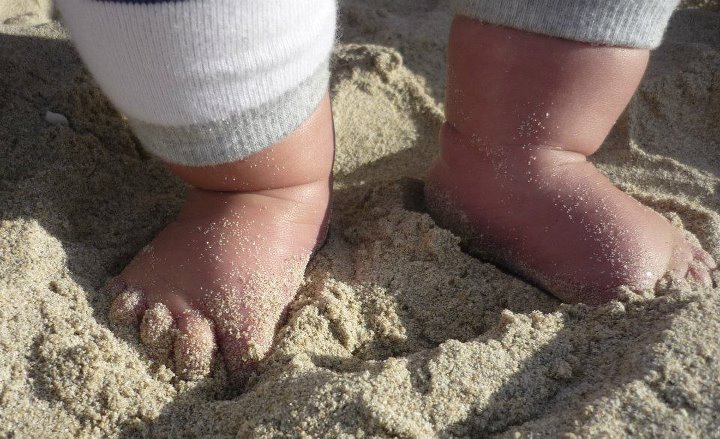 Which is totally a great thing to say when they won’t be your own kids. Joke was on everyone else, though, because we waited four years.

Anyhow, I really want to communicate the fact that the whole “pitter patter of tiny feet” thing is a sham. Who made that saying up anyway? Firstly, newborns can’t pitter patter their feet because, duh, they can’t walk yet! Also, when they can move about for the first time, it’s more of a CLOMP CLOMP PAD PAD SLIDE SLIDE SQUEAL BANG CRASH CRY CLOMP CLOMP SQUEAL BABBLE HUFF PUFF CLOMP CLOMP…followed by an eerie silence in which you wonder what’s happened and run around the house like a mad person looking for your clumsy, grabby offspring!

Right now the Little Mister is enjoying his freedom. He explores our house like a cute little walrus pup. I think he is a very careful driver too because he stops at every intersection and looks both ways. I hope he remembers this skill when he goes for his driver’s licence. It’s actually pretty cute, seeing a little head pop around a wall or piece of furniture as he checks that the coast is clear and ready for some bubba action.

I was reading about childproofing last night (you know – right before bedtime – very relaxing as you peruse the resources for poison control and first aid) and it turns out my house is about as safe as an old, abandoned mine shaft in the middle of nowhere. Or as safe as a swimming pool filled with sharks, piranhas and crocodiles. Or…you get the idea. Apparently my house is a death trap.

We’ve installed a couple of baby proof gates and have systematically removed some dangerous items from the Little Mister’s environment (it’s a sophisticated procedure where we watch him almost do something scary and then remove/secure the offending item/area after having a minor heart attack). I’m getting in the habit of closing doors constantly and following the Little Mister around when I’m not sure if he’s headed for trouble (he likes trouble). It’s always a learning curve and we’re getting there, bit by bit, child proofing product by child proofing product! A lot of it is up to us to be vigilant. Besides, according to the information I read last night, reading a magazine, watching TV or answering the phone could spell disaster. Eek!

The Little Mister is a bit spoilt, because he has a huge, open playroom (99% childproof – I’ll leave 1% off because I’m sure he’ll surprise us by finding that 1% at some point), which is only restricted by a childproof gate. When he wants to leave that area, he will wait by the gate and mew/howl loudly like a kitten/werewolf. Then, much like a kitten, once I open the gate for him to crawl through, he will take his bloody time! Will I or won’t I? 😛

With the Little Mister on the move, it definitely makes life more exciting. Like when he vomits from all his activity after a meal and then slides over the top of the nice, smelly puddle! Or when you didn’t realise he’d done a poo and the smell reaches you before he does (before, you were always there and could start the changing process immediately before it had time to stew a little or become a gross poop pancake in his nappy).

And the squealing. Oh my goodness. He’s found his voice. It’s like Mariah Carey hitting random high notes at inopportune moments (imagine if she followed you around and only hit her highest notes in the supermarket or out for lunch). He’s usually expressing excitement or looking for interaction and he is learning how to manipulate his pitch and volume (which is high and loud). He likes figuring out the sounds he can make and it’s not always easy listening! I’ve found that over the past few months he will alternate in phases. For one period he’ll be squealing and loud. This will be followed by a phase where he learns how to make great new “word” sounds, followed by another period of squealing. Life sure isn’t boring! Bring on the next cute, babbling phase – soon!!!