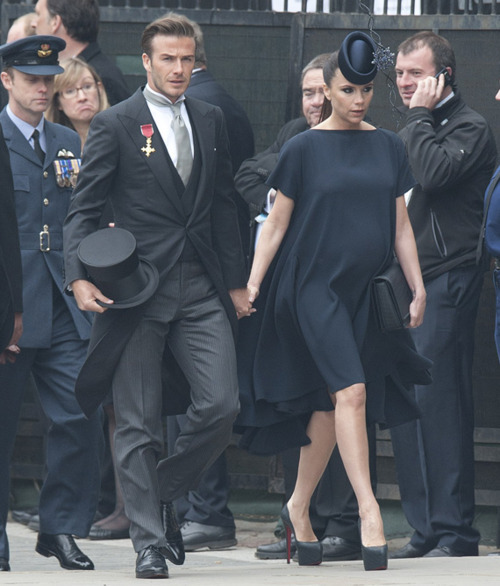 Pic: Now that is maternity chic!

You know how you never notice a certain model or make of car on the road until you buy one? And then all of a sudden you see cars just like yours everywhere? Well, that’s kind of how I feel about pregnant bellies. All of a sudden I feel like I have this crazy radar when it comes to bumps within a million kajillion kilometre radius of me. I can see them. I can see all of them!

I feel like I should insert an evil laugh there, but it doesn’t quite seem appropriate…

And I’ve started believing that every single female celebrity is knocked up too. Not to mention that every single movie I see seems to have a pregnant person in it. I saw Fast and Furious 5 (at a beanbag cinema – needed a hand getting up afterwards) and there was this ridiculous pregnant character (forget her name but she’s the character who’s bonking Paul Walker – yep I remember him) who was jumping off buildings, avoiding bullets and driving cars like she stole them (well – she did). At one point, I’m pretty sure she was walking knee deep in contaminated water in a third world country…and she only threw up once in the movie. All in the first trimester. I think we all know what I thought of that as I watched, collapsed in a beanbag after struggling just to walk around the city of Melbourne all day…

I read that my brain capacity is reduced at this point in pregnancy. I’m a bit forgetful at times (well – more than usual), but I didn’t predict the happiness I would feel zoning out to The Circle when I’m feeling under the weather or my new need to buy New Idea magazines (just the issues with babies of celebrities or pregnant celebrities on the cover). I didn’t predict the dumb thoughts that would pop into my head, like:

Yeah, you get the idea. Forget the fact that tons of babies are born every single year all around the world. My baby is going to be born of the same vintage as some celebrity’s baby. And I still don’t really know who the f*ck January Jones is. But apparently, no-one knows who the father is…shocker.

Don’t even get me started on all the people who think there’s something in the water when they see more than a couple of bumps in my extended social circle!

And let me just say that it gets my goat that celebrities don’t ever reveal how far along they are (probably to avoid crazy paparazzi attention close to the birth), because if I am able to look at skinny celebrities in magazines who are airbrushed and make myself feel crap about my short little legs, then I deserve to be able to compare my bump to other celebrities’ bumps (at all the different stages of pregnancy) and make myself feel awful too! Equal rights!

I think it’s just my odd way of looking for people (or those in the public eye) to relate to as I experience pregnancy for the first time. I don’t want to get overloaded with it all, but it’s nice to know that there are other people going through it all at the same time as me (except I don’t have nannies waiting on stand by or a personal trainer to get me back in shape or exclusive magazine spreads). I’m just so damn fascinated with baby bumps at the moment!! Watch out!