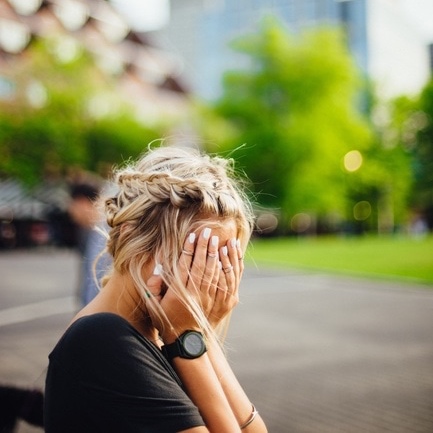 Sometimes I do awkward things. I am always embarrassing myself. Just in really little ways. Like that one time you think nobody saw you drop food on yourself at a classy place but they totally did see. Or when you accidentally say, “Good thanks,” when someone says “Good morning!” Or when someone says, “Happy Birthday” to you on your birthday, and you say, “You too” even though it’s not their birthday. That kind of stuff.

Yesterday, I outdid myself.

I made an accidental FaceTime call.

No. I was not naked at the time, thank goodness. But it was awkward.

I was at a school carnival event for the Little Mister. I’d been watching him and his little classmates having an absolute ball inside a very cool bouncy castle. It was hilarious and I had the camera on my iPhone all ready to go for good photo opportunities. I had been trying to share the day with Mr Unprepared who hates missing these things for work.

At some point I glanced down at my phone and that little green tab at the top indicated that a call was in progress, but I had no idea who I had accidentally dialled. I thought logically, maybe my mum or Mr Unprepared. Either way, it didn’t really matter. I figured there was nothing I’d said or heard during that time that wouldn’t indicate an accidental call. In other words I figured I hadn’t embarrassed myself and could just hang up.

So I opened the call, only to see a blank screen (with my face in the upper corner) and OMFG it was a FACETIME call. I couldn’t immediately tell who I’d rung because I think the phone must have temporarily frozen. I was frantically tapping away at my screen, trying to figure out a) who I’d called and b) how to end it before anyone got embarrassed. I thought FML this person is seeing about 50 chins at this angle right now – this is not good!

There was absolutely no way to hang up for a few seconds (trust me – I tried every option short of smashing my phone with a rock), and then the receiver of my call’s face flashed up nice and big on my phone screen.

Guess who it was?

Yes. That guy. The one who has to get all up in my lady business quite regularly. The kind of professional person who you don’t just call on his mobile unless it’s really important.

I was in shock and there were kids screaming everywhere. I couldn’t hear him and I was just staring back at him and I tried to say loudly, “I’M SORRY! I DIDN’T MEAN TO CALL YOU. MUST BE A WRONG NUMBER. BYEEEE!”

But I couldn’t tell if he could hear me! And he was still there trying to smile politely at me and figure out what the hell was happening! So what did I do? I tried to hang up! But as I tapped the screen in panic, the red hanging up symbol thingy wouldn’t appear! I was stuck in this call and he was still looking at me! And so just like anyone would do in that situation (and by anyone I mean nobody but me), I waved at him awkwardly.

A few seconds later I ended the call. I looked around and I was relieved that the world was still spinning and nobody was aware of the incident. But slightly annoyed that I hadn’t been swallowed up into the depths of the school oval.

I really want to believe that my doctor will have forgotten that the incident happened before I see him next (probably in a couple of weeks damn it). REALLY WANT TO BELIEVE HE’S FORGOTTEN.

What are the odds, though? Of him forgetting, I mean?

But also what are the odds of his number being the one number I FaceTime dialled?? I hadn’t called or messaged his mobile in a long time and he wasn’t logically the first or even the 10th person I’d easily butt dial by default (not that I am a habitual butt dialler thank goodness). I mean, geez!

I think ANYONE ELSE in my contacts list – LITERALLY ANYONE ELSE – would have been less awkward.

Mr Unprepared said I should have just texted him right away after and said something along the lines of, “Oops! I accidentally dialled your number while at a school function for my son! Sorry for the confusion. Have a nice day!”

But I didn’t. Because mortified. And I regret not thinking faster – now it’s too late! God damn it.

Have you ever had an awkward phone moment? Texted the wrong person? FaceTimed someone inappropriately? Left an awkward message? I really need to know!

You can FIND MORE INEVITABLY awkward happenings on Snapchat