So, the Little Mister has a BFF. He (or ‘she’ depending on what mood he is in) comforts him when he needs to sleep. They have been buddies since he was only six months old. They have never spent even a night apart since they were properly introduced during a tough time he was having with nocturnal separation anxiety (i.e. not wanting to let me leave him so I could go to bed and sleep – ever). His buddy, named Giraffey (because I’m so creative), has been everywhere with him. On camping trips, sleepovers with the grandparents, Tasmania, and overseas to Singapore, Japan and Korea. He’s accumulated a couple of other buddies – a glow worm circa nineteen eighty something and a little (used to be) lavender scented cushion – but Giraffey (a cute giraffe head attached to a little square blanket) always holds the number one spot in his heart. Nothing compares.

So you can imagine how all hell broke loose on Friday night when he WENT MISSING.

It was The Worst Timing Ever. We’d had a hell of a day! We were all exhausted. I’d had a flat tyre when I’d left the Little Mister with my parents because he had been behaving far too scratchily to survive the shopping centre (“Won’t be long! Promise! Love you! Thank you so much!”), had to hang about for a few hours until I could get a lift home, had to drive back to meet Mr Unprepared once he knocked off work so he could change it, blah blah. Not to mention the weather – torrential rain. It was the end of a week where the Little Mister had been chucking a few tanties (thanks to a development spurt – they make him quite unbearable for a couple of weeks before he settles again) and everyone had been go go go. We all needed a chilled out Friday evening. TGIF, right?

So it came to the Little Mister’s bed time and the nightly scavenger hunt for Giraffey began (my bets are usually on him being unceremoniously dumped on the playroom floor). Mr Unprepared made the retrieval attempt while I started on bedtime stories (about half an hour later than usual of course). When he began to yell out about not being able to find the little blankie, I started to think non complimentary things about his ‘looking’ skills. Then time began to drag on and I started to think that maybe we were in trouble. We piled the Little Mister into bed and promised him we’d look really hard for his cuddly buddy – that we’d put him right in bed with him as soon as we found him. He really tried and was such a trooper (he actually fell asleep without him), but I knew that the difficulties would arise when he was half asleep and wanting the familiar touch of his precious Giraffey in the middle of the night.

We looked for another solid hour before giving up and praying for the best.

As I lay in bed wondering what the night would bring (mentally trying to prepare myself for everything going to sh*t), I was trying not to think the worst/ridiculous. I was all, WHAT IF THIS IS ALL TOO MUCH FOR HIS LITTLE BRAIN? WHAT IF THIS INCIDENT F*CKS HIM UP? Like if we can’t find him, will the Little Mister lose his faith in all things good at such a tender age? WHAT IF HE WAKES IN THE NIGHT AND REALISES WE LET HIM DOWN?? I don’t want to let him down!! OR…what if we never see Giraffey again and I don’t get to say goodbye??? I know it’s silly, but I’m pretty attached to that little comfort blankie. He’s got quite the personality and he’s been so many places with us! I’d always dreamed of keeping him forever even after the Little Mister became a Big Mister and didn’t need him anymore. That one item I’d always fondly cherish from his childhood. Waaaaah!

Then it started. Every couple of sleep cycles through the night, we heard the Little Mister’s cries. It was a long night. Mr Unprepared and I alternated in comforting him, telling him to cuddle his other giraffe toy (who is no match for Giraffey but a respected member of the Giraffey family in our home) and creeping back to bed. It felt like the bad old teething days. Still, the Little Mister was so brave. He truly did try. It was just a parents’ nightmare, in terms of sleep deprivation! 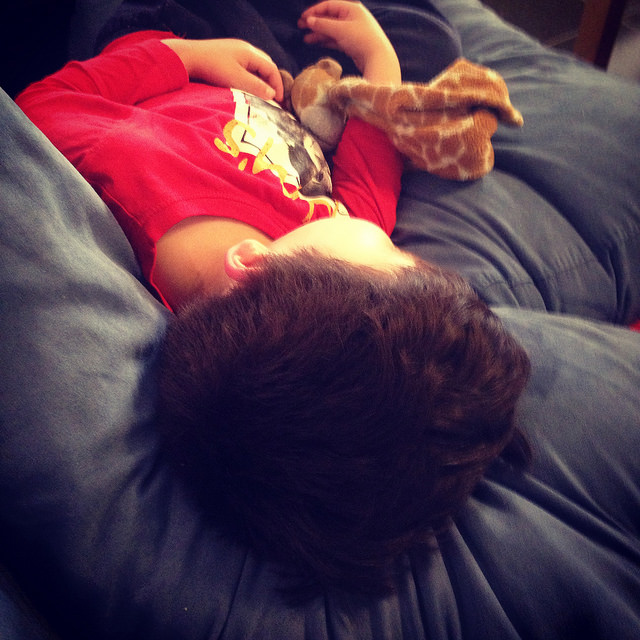 The next morning, we systematically turned the house upside down. I even searched the garage, on my hands and knees looking under the cars as thoroughly as possible with a torch. Nothing. We tried all sorts of techniques to see if the Little Mister could remember where he might have left his best little buddy. Nope. He was no help. He kept confusing that day with the day before when we tried to retrace his whereabouts and it just became a bit of a struggle. We were forced to give up (although our house was suddenly tidier at least) and head out to a birthday party. I started to formulate back up plans in my head. I knew we’d have to have a ‘talk’ about Giraffey possibly not being found in time for bed again that night. I had started to accept that even though, logically Giraffey was at our home (he doesn’t leave unless it’s a special occasion during which we usually keep a keen eye on him), he might not be found for weeks (as was the case with the TV remote incident of 2013).

I started prepping the Little Mister for what might be another difficult night, while we were on our way back home from the party.

“You know, I am not sure but I think that maybe Giraffey has gone on a little holiday! If he has, do you have another toy you’d like to sleep with until he gets back?”

He looked a bit crestfallen. I felt awful.

He then raised an eyebrow and said…

And with that I was stumped. Can’t beat solid pre-schooler logic. NOW WHAT? I WAS BANKING ON THE WHOLE ‘HOLIDAY’ THING.

I decided to drop the issue while I did a little more thinking (my parenting game was obviously lacking).

As we pulled up to our garage, Mr Unprepared hopped out of the car first. He’d left the door up and we were parked only half way in because he needed room to rotate my tyres (after the flat I’d had repaired from the day before). I heard him yell, “GIRAFFEY!”

I looked up and saw him joyously swinging one very important giraffe blankie back and forth in his hand.

“WHERE WAS HE?!?!” I exclaimed in disbelief. I had looked everywhere in the garage, remember?

Turns out, Giraffey had been UNDER my car tyre when Mr Unprepared had parked it up for the previous night. UNDER THE TYRE. I would never have found it. Luckily he was in one piece (even if he smelt like rubber). An elated Little Mister cuddled him tight, ran into the house with him and promptly got distracted, leaving him lying on the floor. Sigh.

There is now a rule that Giraffey only lives in his bedroom!

I think I have a few more grey hairs (you know – underneath all the dye).

Have you ever lost a child’s precious comfort item? Did you find it? Was it somewhere weird? Did you have to have a ‘talk’ and get creative when it never came home? Are you smarter than me and bought fifteen of the same thing just in case? x