Each year I like to write about the unremarkable stuff that happened during the year. Or the stuff that didn’t quite make the blog (which admittedly will be a lot of things because I don’t think I wrote as much as I could have this year). I figure everyone would know the best bits, the highlights, most of the stuff that was a BIG DEAL already. I usually wait until after Christmas, but right before New Year’s Eve to post this stuff, but I decided to jump the gun a bit this year.

So here’s the forgettable stuff that I have found, looking back through my paper diary and at my old social media posts…

In January, I noticed that money was mysteriously appearing in our bank account. Money that could not be accounted for. It was turning up every month right at the time when Mr Unprepared usually got paid, so it was difficult to notice at first – we were very busy and in holiday budgeting mode (i.e. a little bit more relaxed than usual). I know, right? FREE MONEY. But nothing is ever free, and being the painfully honest person that I am, I was determined to find the rightful recipient. Also, I knew that if the mistake was ever noticed, the money could all be taken back out at once in a huge lump sum and we’d be broke and lose the house and never eat again (I might be exaggerating but you get the idea that it would be hugely inconvenient and would hurt). Several visits to the bank ensued. The money just kept on coming, though. These people really wanted me to be rich from doing nothing. I started to wonder who was so rich they didn’t notice these substantial (for us) payments weren’t coming in every month? If that was me, I’d be all like “Where the eff is my money? It’s been a month! I’ve got bills!”

I’ll never be a Kardashian.

Finally, after an email sent to a mysterious accounting/investment firm, all was solved and I no longer have to fantasise that I’m receiving illegal funds involved in some kind of elaborate underworld money laundering scam. I have quite the imagination when I’m stressed haha.

When I wasn’t at the bank, I was at the beach according to my Facebook photos, so I guess things were still pretty good!

Mr Unprepared sold his car on Gumtree. I thought I’d be soooooo hilarious and troll him with a message asking about the vehicle. Let’s just say it didn’t go quite as planned (as evidenced by my Facebook status at the time)…

So…if somebody trolls their significant other’s Gumtree ad with a message enquiring about their vehicle, adding “what’s your favourite colour and do you believe in unicorns?” to the generic message template provided by Gumtree, and then their significant other receives the message, has a little laugh and then accidentally hits the ‘report suspicious email’ link while scrolling with their sausage like thumb…what is going to happen to the somebody who trolled their husband? I mean significant other.
Just asking for a friend.

In case you’re wondering, I didn’t get banned from Gumtree and I even have my own account now. OOH LA LA. FANCY. 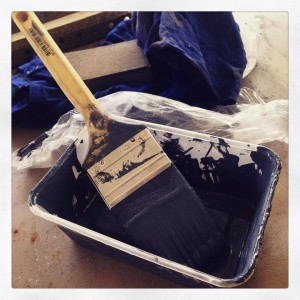 We started painting the gutters. We still haven’t finished. Shut up – we’re getting to it hahaha.

OK, so most of April was quite memorable. There was Easter with family and friends. I went to Sydney for my biggest trip away from the Little Mister so far (was only about 4 days but was quite a big deal for me so of course I was sick the whole time). I shopped up a storm and came home very pleased with myself (and needing a lot of sleep and medicine)!

Oh, and on the 4th I made a potato salad, apparently.

My parents went to New York without me. 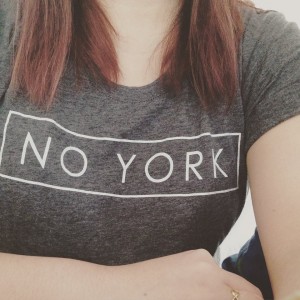 FYI, I was really unimpressed with their lack of remorse or sympathy!!

Also, the Little Mister and I got new dressing gowns. Mine was leopard print with cat ears on the hood and the Little Mister’s was a Minions one. We wore them a lot together, much to the bemusement of Mr Unprepared.

This month I took the Little Mister to the movies for the very first time (since he was really tiny and tagged along to Mums and Bubs sessions). We also met up with a friend of mine who just loves excuses to see kids’ movies haha.

He was so cute. He was really good, and while he demanded snacks a lot, he sat still for most of the movie (Minions) and was in awe of what he was experiencing (with amusing facial expressions to match). I was obviously quite relieved.

It was around now that I really became quite hyper aware that I had a ‘big’ kid and not just a toddler anymore. Very bittersweet, but mostly sweet.

I made this out of Play-doh. I know. Talent. Pure talent. I am really going places. 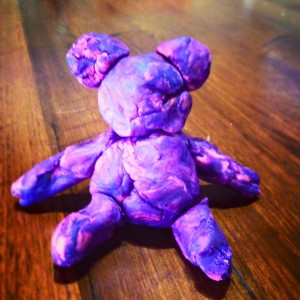 In August, I got stranded at the local shopping centre for hours. It all started when the Little Mister was having a hell of a growth/brain spurt. These spurts always make him quite difficult (he gets really scratchy and difficult for a week or two – so much fun), so I’d finally thrown my arms in the air and reached out to my parents to please please have him for a couple of hours so I could go out and get stuff done. I just knew he would never be able to handle it and I was getting tired. When my parents agreed to have him, I was so grateful I could have kissed their feet. No kidding. But I didn’t because that would be weird.

So, I set off, parked my car at the shopping centre. Nothing to see here. Went and completed my to do list. Got sick of the place (it doesn’t take long – trust me). I went to leave and something wasn’t right with my car (keep in mind I had an expensive flat tyre only a few months earlier – if that). I pulled up in another parking spot and inspected the tyres. Yep. One was flat as a pancake. I wasn’t going anywhere.

The tyre place (literally 100m away – not even kidding) wouldn’t send someone to help me, because of insurance issues, my parents were hours away (they were caught up) and I had stupidly turned down the help of a friend I’d run into, who offered to help. I could have done it myself, admittedly, but I’d parked awkwardly and tyres are heavy and I just wasn’t that desperate to look like an idiot (because while I know how to do it I know it wouldn’t come easily haha). I could wait.

Well. During that time, an alarm went off – WOO WOO WOO WOO and stuff started to shut down, while people wondered what the hell to do. After that was resolved, I spent quite a lot of time reading a magazine in the food court and I tried on clothes in every store. Shopping really was my cardio. I swear I did fifteen laps of the place.

I lived to tell the tale (and have never been more grateful that the Little Mister wasn’t with me), but I am now paranoid about my tyres. Like dead set PARANOID.

And I still hate that shopping centre (always have).

My parents were away for Dad’s work, so I had offered (i.e. had no choice haha) to check on things while they were gone. I work there too, so it wasn’t a big deal. Let’s just say that there was a really dead frog in the skimmer box of their pool and I had to touch it and it was really really gross and I can’t even begin to tell you. Ugh. Alive frogs I can touch. Because alive. Slimy dead frogs that are still submerged – HELL NO.

I had an appointment to see a haematologist. I got to sit in the waiting room for a long time and listen to the other people. There was the old married guy with the dodgy knee who was flirting with the old married (to somebody else) lady who had something else wrong with her. He bragged about his lawn bowls skills. Then there was another old person texting somebody on their phone, with the key tones on – the ones that make that bloop bloop bloop sound really loudly every time they type a letter. I read a scintillating article about people who only create a mason jar’s worth of household waste in a whole year and thought FUCK THAT (which I am aware makes me a very bad person who is helping to wreck the planet).

My mum and I went shopping together (minus a child) for the first time in ages. It was great. We ticked things off my to-do list, but more importantly, we had corn chips and guacamole for lunch.

Well, the month is far from over, so I might leave it open ended. I am sure that many forgettable things will happen before the beginning of 2016!

If you made it through this post, then you are the most patient person and I applaud you for your strength of character – bonus points if you’re still awake!