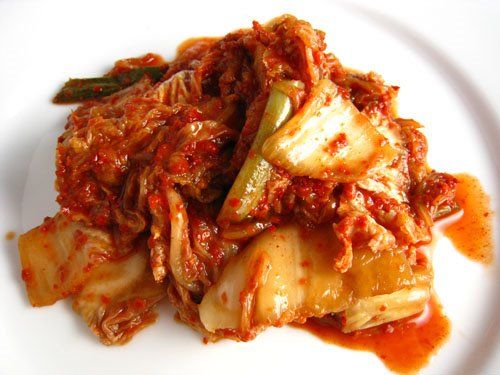 image (not mine unfortunately)

If you know anything about Korean cuisine, you will know that kimchi is a huuuuuuuge part of the eating experience. What is it? Essentially, it’s like a reeeeeally spicy chilli cabbage that is often fermented or pickled in some way. This is often a side dish (the Koreans are amazing for side dishes – you will never starve) that will turn up with just about every meal.

I have spent most of my life avoiding it. While I’d dabbled in the enjoyment of various Korean foods (after one fateful day when my family with the help of Mr Unprepared literally shoved me so far into the doorway of a Korean restaurant in Melbourne that I couldn’t turn back), I had managed to protest that spicy cabbage was not exactly high on my to-eat list. Ever. Especially because I do not do ‘spicy’ very well and because, well…it’s just cabbage. What’s so special about cabbage that’s been made super spicy? Yes, I am a terrible Korean – I am sure I just committed blasphemy.

In the months leading up to our trip to Korea, I had been psyching myself up to try it. It felt like something I had to try at least once in my life. It would probably seem wrong to go to Korea and not even try it. I had to take the challenge at some point and I wanted to be able to say I knew what it tasted like. To know what it’s like to experience it. I just wouldn’t feel like I was taking Korean food seriously if I avoided it the whole trip. And you know how I take my food seriously. No joke. Seriously.

On the first night we were in Seoul, we stumbled across a gorgeous little restaurant in Insadong (a gorgeous arty area in the city). We had NO idea what we were doing, but we jumped on in headfirst and before we knew it we were seated in a cute little alcove ordering Bulgogi (a really awesome beef dish) and other various delicacies. This involved a lot of pointing at the menu and gesturing. We had no idea what was about to arrive at our table or where to place our chopsticks or spoons. The lady who served us spoke little to no English and we all had a laugh at our awkward ‘conversation’. She was really helpful and even told my brother that he was using the wrong spoon for everything which we found highly amusing. Later in the evening, she even brought the Little Mister some candy to amuse him (he wasn’t a fan but the gesture was so sweet – excuse the pun).

We quickly realised that there is no need to think you’ll go hungry after ordering very few dishes in a Korean restaurant. Unlike the Aussie way, you do not have to order each and every side separately to your main dish (and pay through the nose for it). The kimchi and the other various pickled delicacies, tofus or leaves etc come with it included. The Korean people believe that pickled or fermented foods are essential to having a balanced meal and they are supposed to be good for your gut. Before you know it, your dinner table will be FULL of new things to try. Also, food is very affordable there. Our family of 6 (including the Little Mister) could eat for around $60 (Aussie) a night and feel full to bloated by the end of it! Awesome!! That’s around $10 a head – including some beer or other soft drinks! 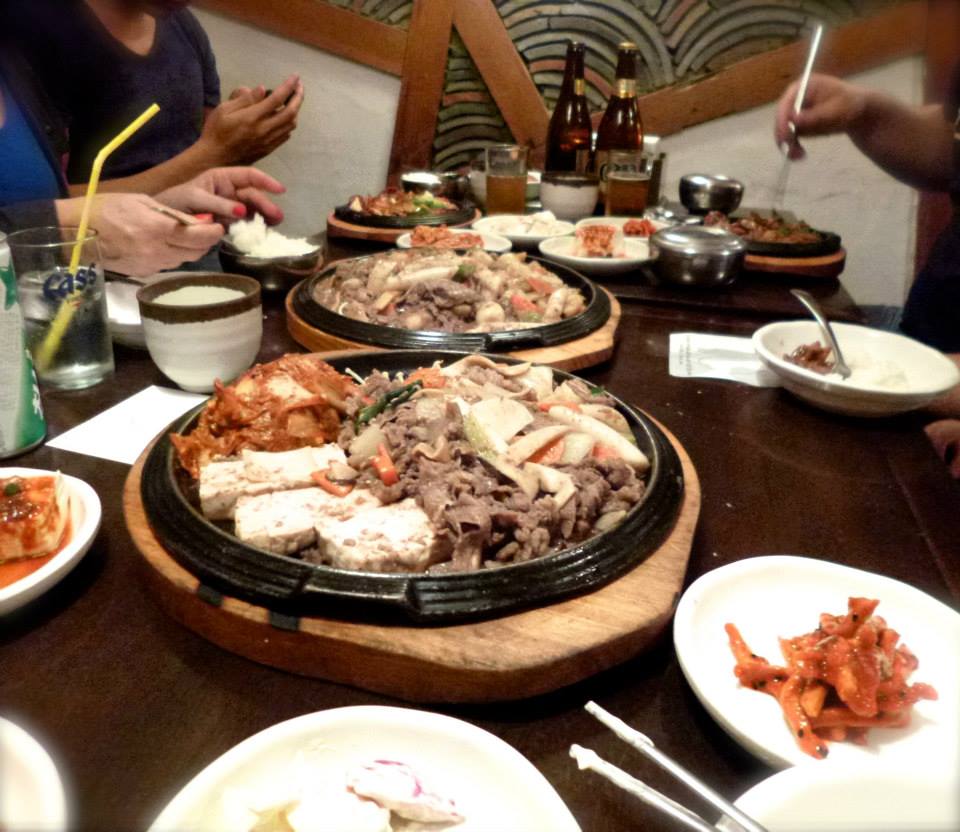 I think we look back fondly on this night as our favourite Korean meal, perhaps because it was such a great introduction to our food experience in Korea. We were full of excitement and ready to start this leg of the adventure – the country my brother and I had been born in. This was what we had been waiting for. The Little Mister wasn’t so sure about all of the foods on offer, but he loved the little rice tubes that came with the Bulgogi and he also ate lots of white rice (to really make it a varied meal haha). We had to keep his hands out of the kimchi, always moving it further away when it was served throughout the holiday. I had visions of him rubbing his eyes with super strong chilli after touching it so we were always trying to avoid such a situation!

So, the thing you’ve been waiting for. Did I try kimchi? Or did I run away screaming? Or both?

Luckily, I have photographic proof… 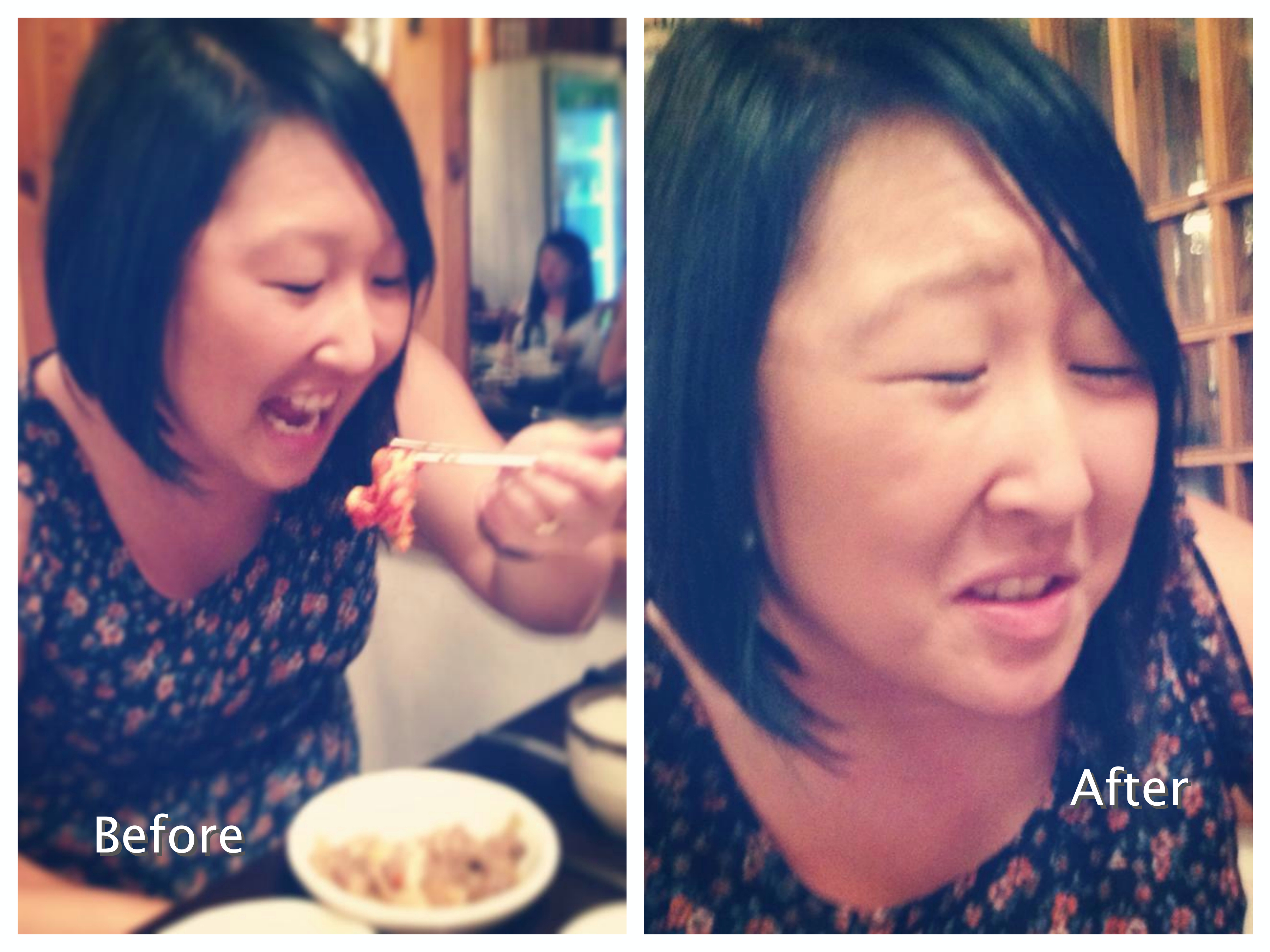 Yep. It was very spicy. I know my threshold for tolerance of spicy things is probably lower than the average person, but man, my mouth. I felt the burn. Right after the ‘after’ face I pulled, I shoved in some rice and then some cider (what they call your regular store bought fizzy lemonade). All was well again and I had triumphed! Woohoo! As you can see, I totally live on the edge. So wild. You never know what I’m going to do next. OK, so that’s a lie. Shut up.

Can you believe that this was not the only time I willingly and voluntarily ate kimchi? I surprised myself on several other occasions, by reaching for some because I wanted to balance out the other flavours of our meals with a bit of spice. Who am I??? Of course, I always had to ‘chase’ it with something non spicy (and maybe some beer) in order to survive it, but trust me – I’ve come a long way.

When is the last time you tried a new food? Did it scare you? What do you think of kimchi? Have you tried it?

More about our trip to Korea and Japan: