For many years, when I thought of South Korea, I didn’t think of beautiful beaches. I thought of cold winters with snow and an ‘inland’ kind of feel. I wasn’t very educated on my birth country, mostly by stubborn choice (such a rebel), because I wanted to just get on with being an Aussie and no-one was gonna stop me! How wrong I was (well there is snow and every country has an ‘inland’ bit but I had no idea how much more the place has to offer).

While we were away, we visited Gyeongpo. It is a place known for its beach and a beautiful lake (the water looks like glass). It looked like it was undergoing a lot of changes to make it look really fresh and modern, as it is not far from where the Winter Olympics will be held in 2018. We visited in June (the very beginning of summer – felt like an Aussie spring day when we were there), so people were sitting on the beach (some even braving the cold water in floating tubes) and spending a day in the sunshine.

It was lunch time when we got there and the Little Mister was getting over tired and frustrated. He had also been refusing a lot of Korean food and not drinking enough, so wasn’t feeling 100%, we suspected. We were feeling a little worried about this as we tried to find somewhere to eat lunch. There were mostly seafood places and to be honest, they were a little out of our comfort zones as we couldn’t tell which places might be safer than others to eat. Eventually, with no choices left, we went to a place that looked popular and just took the chance. We were seated in a little room, with a low table and cushions to sit on – very traditional. We had to all take our shoes off and as we sat down we wondered if there was any chance in hell that the Little Mister would sit still and not get onto the table or start grabbing things that he shouldn’t grab!! We weren’t even sure what he would eat!

We ordered some sashimi, some sushi and who knows what else, thinking that we weren’t too hungry or sure of the food. Considering Mr Unprepared is not a huge seafood fan (outside of the usual fish and chips), this was a big deal haha. Of course we were fed several side dishes that were very new to us. Omelettes, tempura octopus, pickled onions, and a massive feast of other things I can’t remember right now! It was surprisingly enjoyable, although the raw fish was quite the adventure! Watching my brother and Mr Unprepared chewing (and chewing and chewing) on some of it was quite amusing. There was SO MUCH of it that our minds boggled because at home, it would cost a FORTUNE to eat that much food, especially seafood. I think we felt a little bad when we couldn’t finish it on account of all the side dishes filling us up! 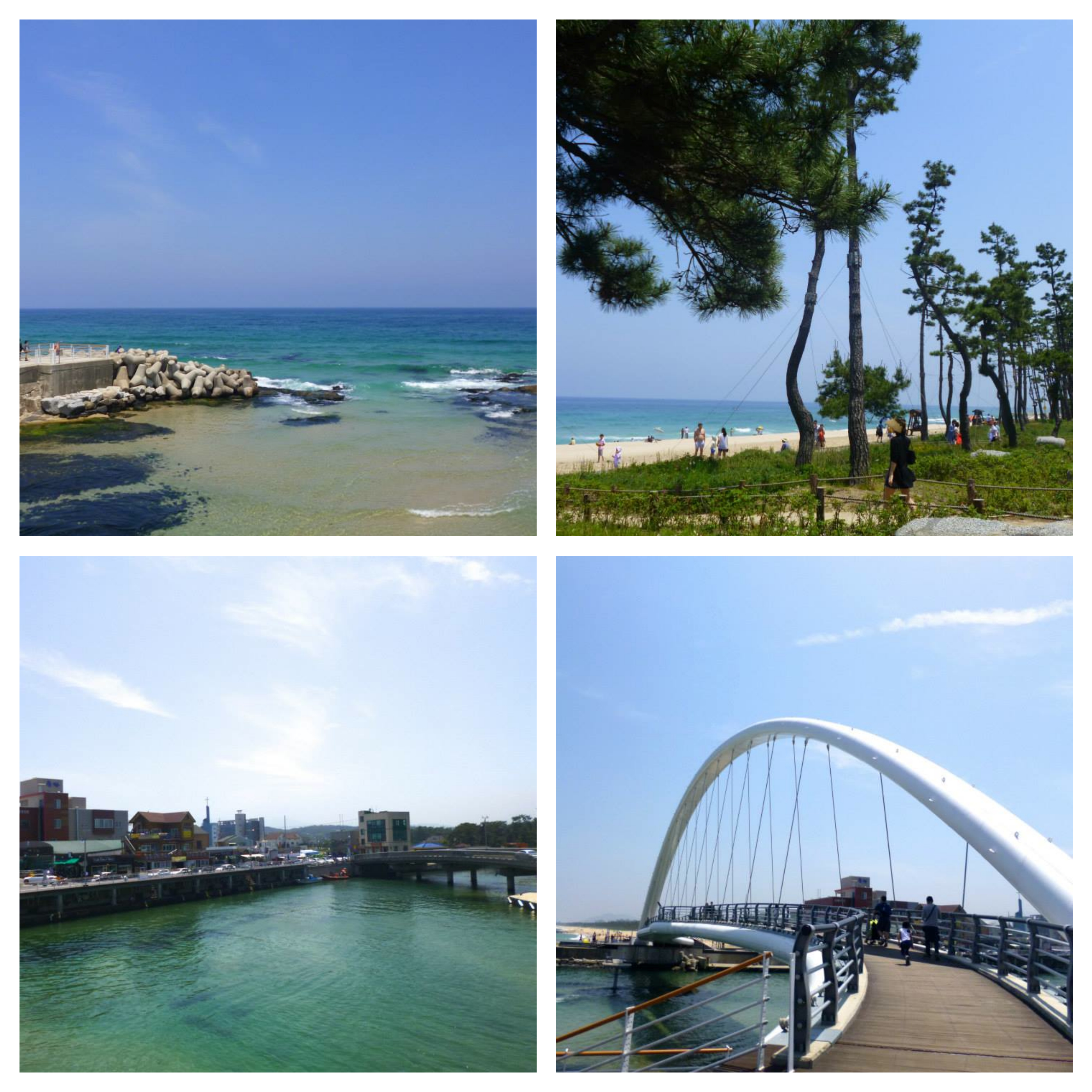 We walked a fair distance around one side of the Gyeongpo Lake. It was beautiful and people were riding bikes – tandem bikes, pedal powered wagons and all sorts of other creative bicycle typed vehicles. We did witness a little crash that left a couple of young girls in tears, but all in all it looked like great fun. It would be a great place to exercise every day. The pathways even had a harder surface on one side for bikes etc and a spongier, more forgiving side for runners and walkers. So clever.

Check out the scenery (and my brother doing his photography thing while I just stalked him and took a photo of him taking photos because that’s not weird or anything). There are some Olympic rings taking pride of place on a round-a-bout by the lake. It will be so fun watching the Winter Olympics in a few years time, knowing that I have visited some of the places that are sure to be showcased. I’ll probably just ignore that pesky sports stuff, though. Haha. 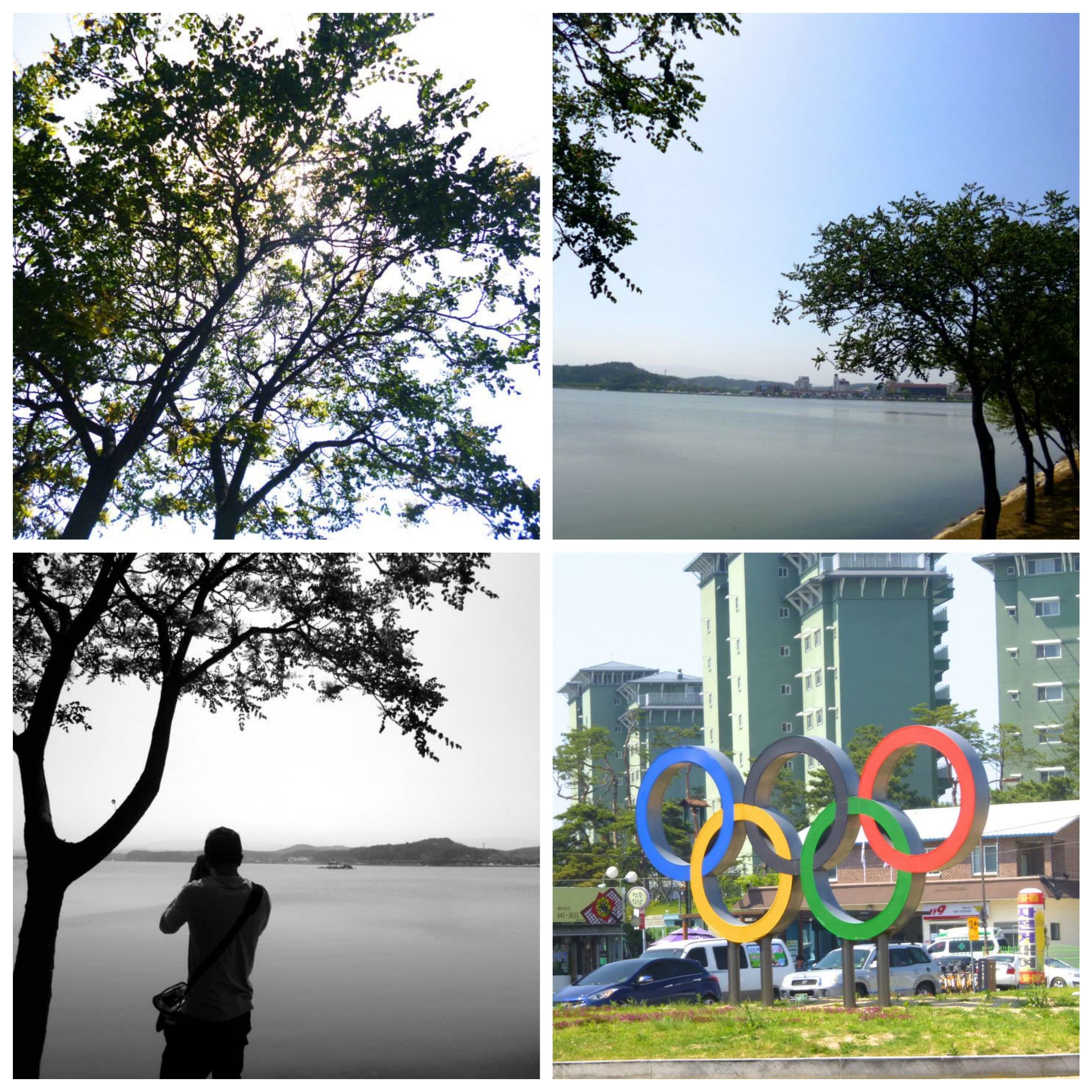 Have you ever been (pleasantly or unpleasantly) surprised by a place?