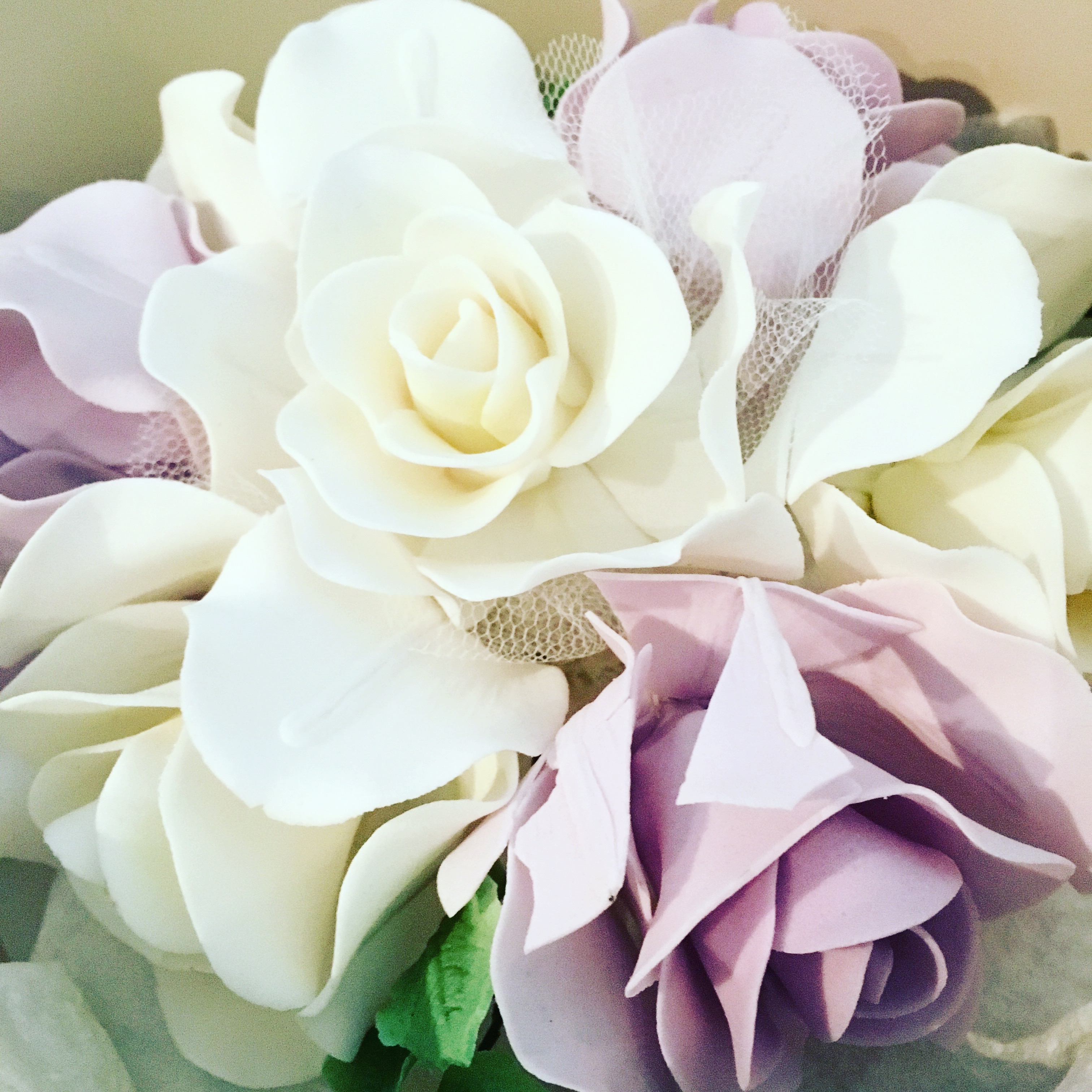 The other day, I was looking in the back of the kitchen cupboard for some serving bowls I hadn’t used for a really long time (we should really have people over more often) and I stumbled upon an old cake container (the kind my mum used to have). I wondered why I still had it and opened it up. Inside were the beautiful sugar flowers from the top of our wedding cake (we got married in 2007). I’d forgotten I had them! They were in great condition, although a tiny bit faded. I was transported back in time and I am still impressed at how talented our cake lady was.

I wondered why I had forgotten a detail like that. Then I realised that I do not have many photos of the wedding cake. Sure, there are a couple of us cutting it, but nothing really close up. I guess it didn’t occur to us. It seemed out of character for me as I like to photograph and post just about everything these days (guilty over sharer/memory keeper)! Of course I popped a photo of the flowers straight onto Instagram as soon as I rediscovered them – ha!

Thing is, we got married (and planned our wedding) at least two years before Facebook really took off over here for most of my friends and I (according to Facebook’s ‘memories’)! Instagram, Snapchat and Twitter didn’t exist! Myspace was still the coolest and I probably had a blog, but nothing was what it is now online, that’s for sure! Posting was not always easy – I didn’t even have an iPhone or a data plan for whatever I was using! Looking at the internet on your phone wasn’t even a thing unless you were tech obsessed and rich!

There were no hashtags for a wedding #kezgetshitchedtothatguy or etiquette required about how soon was too soon to post about the wedding if it wasn’t your wedding and whether you should allow people to use social media during the ceremony etc.

We even had disposable cameras (with film in them) on each table at the reception (yes – digital cameras were totally a thing by then but film was still around you guys)!

There were no rolling Instagram/Pinterest feeds to show me how terrible my wedding would look in comparison to every stranger’s ever and to make me feel like I had to spend a million bucks to have all the things people expect at weddings today. But in saying that, there were no fantastically easy-to-access boutique Facebook/Instagram businesses to add that really unique, affordable touch to the big day! Pinterest would have been so handy for collating ideas while googling my future wedding to within an inch of its life!

eBay was a thing but online shopping was definitely not as prevalent or as easy and reliable as it is now.

Our wedding was simple and elegant (and while it was not going to feature on Australia’s Cheapest Weddings it was certainly not what people seem to be spending on average these days) and while social media might have given it that extra something aesthetically, both in terms of shopping/planning and for the recording of memories, I am kind of relieved to not have to have dealt with the noise of comparing our big day to everybody else’s or feeling pressured to ‘keep up’ and I think it did mean less distractions on the day for everyone involved.

Our wedding would probably be considered pretty basic by today’s wedding standards, but I don’t mind at all. It’s kind of a relief that we got married just before before these overly documented times.

Did you get married just before or after social media became a thing? How do you feel about it?