Oh, boy. Where to start…

It was the big day. Of course, I hardly slept the night before! I was so nervous. My brain kept telling me things could go wrong. I just wanted my baby to be OK and for me to not be irreversibly messed up mentally or physically. I was excited to meet my baby. I was stunned that this was really going to finally happen. I was relieved that I’d finally packed our hospital bags after procrastinating like crazy. It was like packing for a holiday that wasn’t going to be much of a holiday! I was just hoping that meeting the Little Miss and holding her in my arms would be enough to make the challenges of my pregnancy and the anxiety about keeping her safe inside me fade away.

I had so many feelings about my first birth experience with the Little Mister that felt a little unresolved (they’d risen their ugly heads during my pregnancy with the Little Miss) and I tried to have no expectations that this experience would be any better/different. I did not want to put pressure on myself that this time would fix everything I felt I’d missed out on (despite me being so lucky at the same time in so many other ways). I didn’t want to set myself up for disappointment or post natal anxiety/depression.

We had to wake at 4am in order to be ready and in the hospital by 6:30am. The car ride up felt surreal. I had trouble wrapping my head around the fact that by the end of the day, I would have an actual baby out in the world. Having a planned C-section is so weird haha.

We waited nervously in the day surgery waiting room (a pokey little place) with a bunch of other people. We had no idea where we were on the surgery list and tried to brace ourselves for a potentially long wait. Luckily, things moved fairly fast. We were called into a room with a midwife who took down some of my details and prepared me. I was put in a sexy backless gown, had my equally sexy compression stocking thingies put on, plus some gorgeous paper bootie thingies. We were taken into a nicer waiting room full of comfy recliners where I got to watch Family Feud on a TV (I would have won by the way). Thanks for the distraction, Grant Denyer!

Having my name called out gave me that kind of “oh shit – we’re on” feeling. I was to be seen and prepped by the anaesthetist and that’s when the nerves kicked in. The tech said she’d be putting a drip in my arm and holy shit, she messed up. She left the touniquet strap thingy tight on my arm and blood spurted out of my hand and I got bruised and then she knew she’d stuffed up so she said she’d get the anaesthetist to do it instead, but still didn’t take the strap off and I watched my arm turn blue and get splotches on it and I wanted to take it off (because survival instinct) but I wasn’t sure what to do. She came back just as I was about to take matters into my own hands and we were like WTF and she freaked out, took it off, apologised and left the room never to be seen again (definitely a smart move). Not a great start! I was starting to think this was a bad sign!

When the anaesthetist and another tech entered the room I felt relieved. They got everything started, had a real air of confidence and competence about them and had lots of jokes to make. I was put at ease. They even got Mr Unprepared in on the laughs (apparently a lot of men pass out in theatre so it was just as important to them to make him feel comfortable)! It was really funny to the anaesthetist that I flinched whenever he rubbed cold stuff on my back (that pink antiseptic stuff or whatever it is exactly) but not when he administered the local anaesthetic needle and the epidural! Well, duh. I knew when to stay still – call it survival instinct or just pure fear haha.

After they had tested me to make sure I wouldn’t feel any pain below my chest, my upper body (mostly my arms) started to shake uncontrollably. I asked if it was nerves or a reaction to the spinal block. Apparently it was both and it wasn’t too much of an issue. They would just try to keep my shoulders and arms warm with a blanket. I was rolled into theatre where the midwives introduced themselves a second time (they had met me in the waiting room earlier which I thought was lovely) and I noted that they were wearing their names and positions on their hat thingies. I’d read an article about how that was a good idea only the week before and thought it was comforting to know who was who when they were all dressed up in their scrubs and masks. The surgeon who I had only met a few days before was there and once again I felt good to be in her presence – you know how some people just give you a good feeling? I liked her energy. Another good sign.

I noticed there were shiny metal vents on the roof. This worried me even though I was positioned in a way that I probably would not have seen much of a reflection. I did not want to see ANYTHING by accident. I made a mental note to not look there. I clung onto Mr Unprepared’s hand and looked squarely at the sheet they had hung up between my chest and my belly. I wasn’t sure what I would feel, as during the Little Mister’s birth I hadn’t felt a thing. This time I felt tugging and pulling but I was so relieved that none of it hurt. I just tried not to imagine what they were actually doing so I wouldn’t freak about my guts and stuff hanging open!

I felt a big ‘bloop’ of a pull and heard a cry as they held the Little Miss high enough for me to see. I’ll never forget that moment. I was overcome with relief and happiness and love. It was so emotional. She was our daughter and she was OK and I was OK and I cried. All I could think was I DID IT. I had carried her all this way and she was alive and she was OK and our dreams had finally come true. I had felt like I was pregnant for all 3 years that we tried to conceive and finally here she was. Oh crap – I’m crying while I type this – what a sap haha.

And you know what? So much healing was done for me that day. Like I said, I had gone in with no expectations (OK so I had prepared myself for things to not go perfectly smoothly because anxiety), but this experience just restored my faith. You have no idea. We were able to hold the Little Miss for the whole time I was stitched back up and then when I was wheeled into recovery. I even got to put her on my breast right away and she latched on like a little legend. I was ‘with it’ and I was with her and my boobs were working (which in itself was not the be all and end all but more a sign that I was in good health). If you know my son’s birth story, you’ll know why this was so meaningful.

The only time we were separated was when she went to the special care nursery for 7 hours because her blood sugar was a bit low (this can happen with babies whose mothers have had gestational diabetes). They had to give her some formula and some colostrum I sent down there and keep an eye on her. Mr Unprepared was with her during a lot of that time and it brought me comfort to know they were in the same hospital as me. I hadn’t had that opportunity 6 years ago. She came back to me in the middle of the night and I was so happy to see her, even though I got NO sleep haha.

She weighed 3.1kg at birth and I couldn’t believe how small she was compared to my beloved boofheaded first born. This made me feel so glad she was delivered when she was. The docs’ ultrasound measurements had been spot on. She had not been growing as fast as she should have been (especially for a GD baby). I’d only fattened her up a bit in the last week of my pregnancy (she’d been measuring at 2.6kg – a concern because she was an IVF baby and GD baby – both risk factors) when I tried really hard to eat more and relax my strict diet a bit (yes – I cheated within reason because I was worried for her and I didn’t give too many fucks because she was so close to being delivered).

I was in really good hands at the hospital and I am so grateful for the caring midwives who do the kinds of jobs that I don’t think most normal people would enjoy! I may have got grumpy and stir crazy by the end of my stay, but I cannot fault the care I was in. I felt validated after what I’d been through during pregnancy and surgery and I was treated with so much dignity in some really undignified circumstances. It was a far cry from one midwife I’d had after delivering the Little Mister, who had said in a “toughen up princess” kind of tone, “You don’t like pain do you?” and then pointed out my stretch marks to a student nurse, completely ignorant to the fact that I’d had PUPPP rash and my baby wasn’t even with me for 3 days – something most women would find distressing!

Like I said, this time around healed so many tough memories that had hung around in the back of my mind. I won’t have to worry about any of those things happening ever again. My family became complete on the 23rd January at 10:49am. I have two beautiful children who are thriving. I am healthy and safe. We are so lucky. 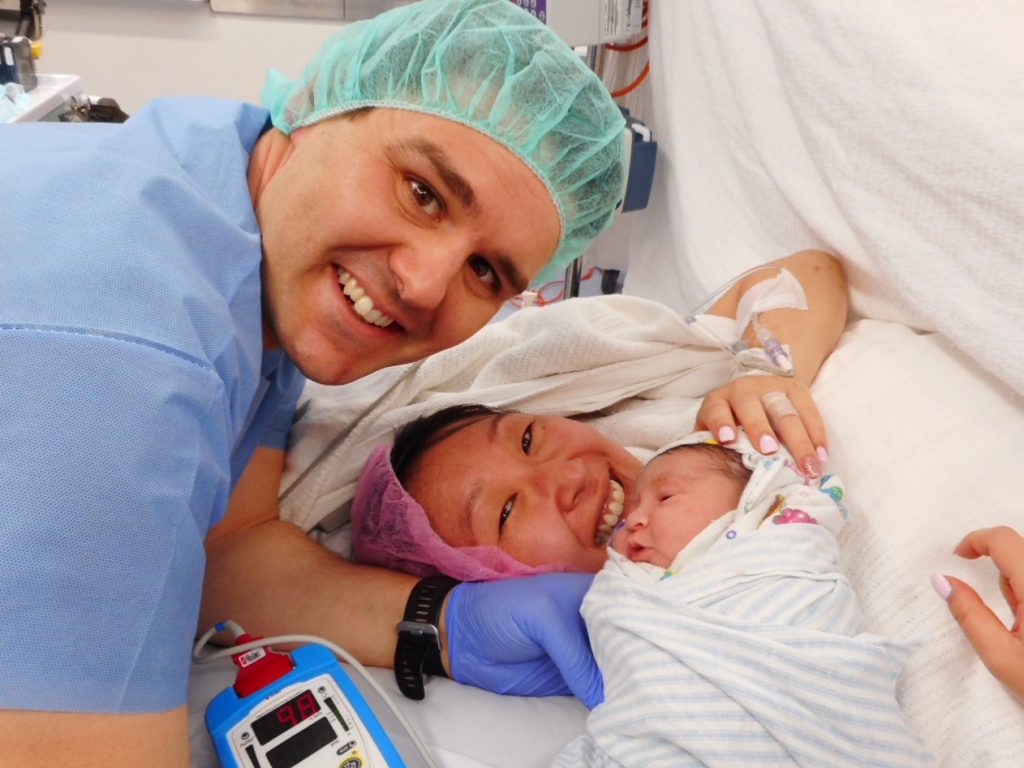