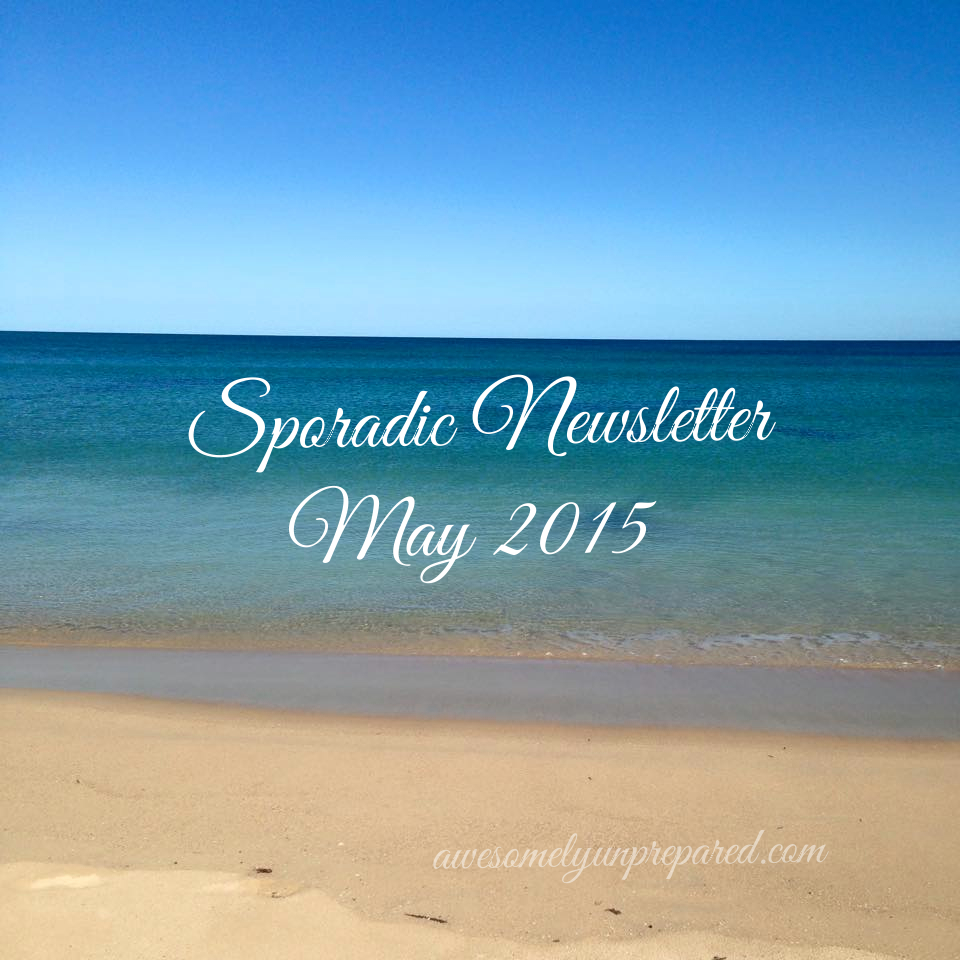 It’s like a news letter for the lazy blogger. I don’t have to send it anywhere and I don’t have to stick to a deadline. I just write about the stuff that’s been happening lately. Kind of a round up of newsy type stuff. “Newsy” being not only a terrible, weird word, but also an overstatement…

So it was Mother’s Day yesterday. I think it might have been my favourite Mother’s Day since I’ve become a mum. I feel like I’ve settled into the role quite well (as well as a person can that is) and I actually felt like a mum and not a shell shocked woman child who has no idea how to do Mother’s Day as a …mother.

I was given a gorgeous day care creation with the Little Mister’s hand prints and a message:

“I love my mum because … she plays with me.”

Which made me feel like the best mum ever, because let’s be honest, some days I just really don’t want to (like REALLY don’t feel like it). It was nice to know my little man appreciates it so much when I do.

Mr Unprepared outdid himself. He presented me with a beautifully framed painting. It wasn’t just any painting. It was a priceless painting created by my late grandmother. She was an artist and after she passed away, we were privileged enough to keep some of her work. It means a lot to me. Also, it’s a picture of a beach, looking all wild (like beaches tend to do in Tasmanian weather). I love the beach. I love my memories of visiting my grandparents in Tasmania. I feel a real connection with her when I look at it.

As my mum was busy (she had to help get my dad to the airport for work so we’ll celebrate next weekend) and my mother in law is away on holiday, it was just me and my little family at home yesterday. I had pancakes for breakfast in bed (the Little Mister brought his own empty plate along which I think was pretty presumptuous but hilarious) and I did whatever the hell I wanted to do all day (which wasn’t a lot). I felt very spoilt and only a tiny bit guilty milking the day for what it was worth!

And you know what? I think that was just what I needed! I have woken this morning feeling so refreshed and motivated. It’s great. I don’t think I’ve felt like this in weeks!!

I have been enjoying some new-to-me simple recipes. Here are a couple:

Oven roasted cauliflower. YUM. Really simple. It’s a great side dish. I do a whole cauliflower and don’t care if there’s heaps of leftovers. I keep those for when I’m starving and looking for a snack. It really is the best ever. As a carb-o-holic, I find this soothes my cravings so well. It’s obviously better for me than potato haha. Not that I’ve stopped my potato habit, by any means, but I think of this as my weaning process. ‘Process’ being the key word at the moment haha.

Nigella Lawson’s Simple Macaroni Cheese. I found this on Chantelle’s Fat Mum Slim blog. So easy and comforting! I like to smuggle veggies into it and the Little Mister just chows it down. Mid week fast meal win!

I’ve also started to enjoy Masterchef again. I thought I would be sick of it by now, but I’ve been sucked right in. What can I say? I love food. My new guilty pleasure is to catch up on episodes on the iPad while cooking to a standard that I can only describe as sub par. BLISS!

While I absolutely adore the Little Mister’s creative side, it does pose some challenges.

He loves to draw. So he pumps out about 50 crayon drawings a day and there is paper EVERYWHERE! I am waiting until he’s asleep or at day care so I can pick some great creations to keep and ‘recycle’ some without him noticing. I used to think I’d keep EVERYTHING because I’m a bit sentimental, but I was wrong. So wrong. It is full on, man.

OH LORD, THINK OF THE TREES.

We did actually have a little talk about how paper is made out of trees and that’s why we need to use both sides of the page and stop stealing more paper from Mummy’s home office (future lady cave) without asking.

Maybe I should get him an etch-a-sketch haha.

Although, some of his creations crack me up. The other day he came to me and declared proudly, “Look, Mummy! I drew a dirty (his word for overly ripe) banana!” 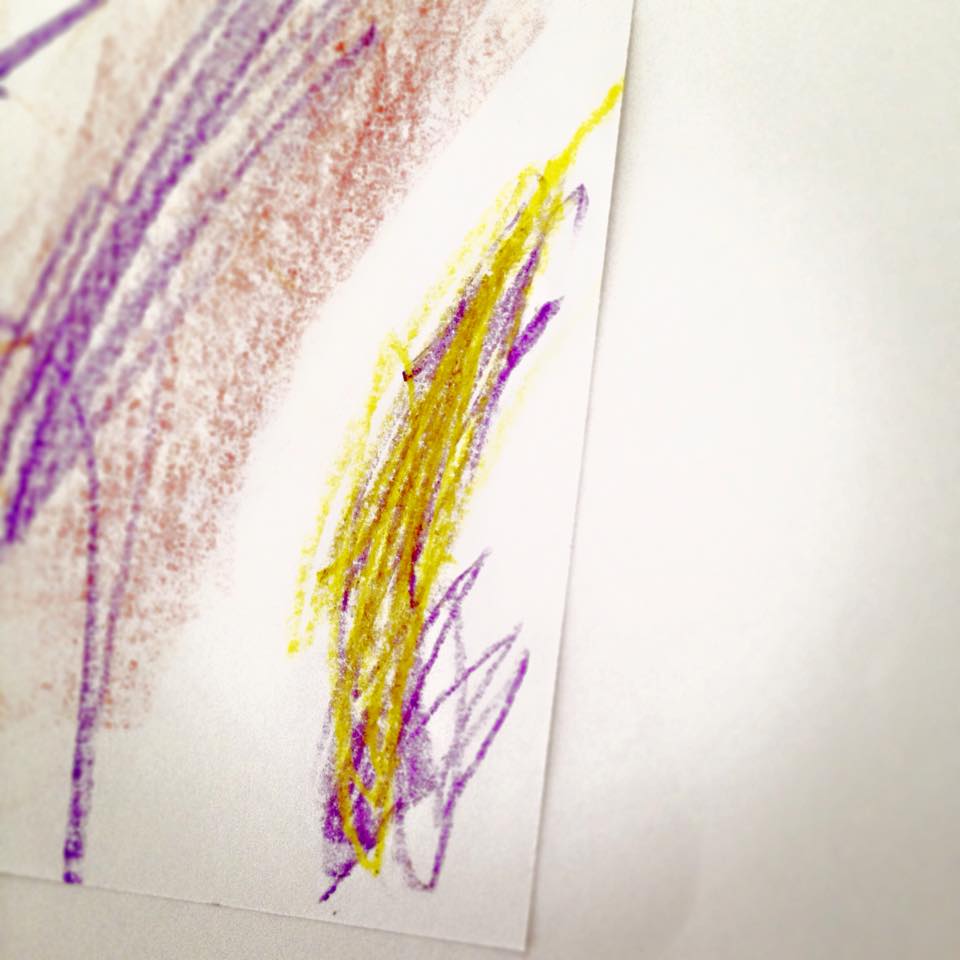 Haha kidding. It’s terrible. But I love it because he drew it and it made me laugh and it’s kind of/sort of the right shape and colour.

Also, I think I really need to clear the fruit bowl out more often.

Keeping it real in the Unprepared household.

Deleting photos off the iPad.

The Little Mister has become excited about using our devices to take photos. He takes photos of me from THE WORST angles, but he is so cute about it. Problem is, his photography skills aren’t so well developed at 3 and a half years old (duh).

Here is what I found on the iPad the other day:

259 photos of the coffee table.

3 videos of some vague area next to the kitchen (one in which Mr Unprepared walks by – which begs the question – who was supervising?!!?!).

74 photos of the dining table.

2 videos of the dining table.

Hey, maybe he’ll be the one laughing when he’s a world famous table photographer one day… *coughsnort*

The Little Mister has given up day sleeps. I was HORRIFIED when I first realised. HORRIFIED. Maybe it’s because he is usually a good sleeper (please don’t hate me) or because he hasn’t had a younger sibling messing up his routine, but we made it to 3.5 years old before my precious quiet time was shattered to smithereens.

At first I was in denial, then I was a bit mad, then I tried to bargain with him – if you have some quiet time in your room you can do whatever you want as long as you are a good boy, and now I have finally begun to accept it.

I’ve got my little sidekick all day, almost every day. I’m training him to know when it’s quiet time and to give me a little break and he’s been quite good about it, considering how demanding he can be the rest of the day.

To be honest, it’s kind of been a relief too. I don’t have to worry that he’s going to be a massive feral if he doesn’t get his nap, because his stamina has increased a lot. It means we can do more in a day and not worry about the time. The day isn’t split into two sections anymore. I can be more productive at home and we can go more places.

I am pleased, though. He will be at 4 year olds kindy next year and he’ll need this stamina to do 3 full days a week. And hey, maybe I’ll get a bit more quiet time then (yeah right but I can dream)!

So that’s all from me!

What have you been doing/dealing with lately? How do you enforce some quiet time if your child has given up day sleeps? Did you have a nice Mother’s Day? Does your kid draw about 50 million pictures a day? What do you do with them?