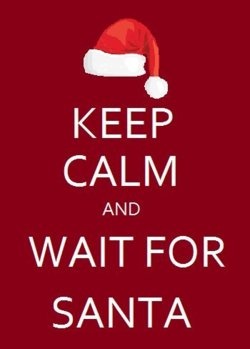 When the Little Mister was one (2012), we trotted down to the shopping centre, thinking how nice it would be for our bubbly, very sociable dude to have a photo with Santa. We imagined him sitting there, looking so excited and happy (his facial expressions are ridiculous and fantastic – he’ll never win a poker game), cameras capturing every magical moment. We would be able to send it out to all the grandparents and we’d have something to stick on our fridge and admire. We got there and he freaked out. There was this jolly guy wearing a MASSIVE curly beard, nothing but his eyes just visible behind a pair of glasses. It was all too much. The Little Mister got a cute soft toy and we made as graceful an exit as we could. Never mind, we thought. He’ll be OK next year maybe?

Fast forward to 2013 and we’d decided not to bother too much. There was a Santa that sat in our little local shopping centre. No fuss. No fanfare. No photographers. If he was there, we’d give it a go. If he wasn’t, no biggie. Plenty of time. As luck had it, the lack of pressure and the fact that this Santa did not have such a big beard worked in our favour. The Little Mister sat on Santa’s lap and all I had was my iPhone (I was unprepared of course) so I took a couple of snaps. Better than nothing! Boy, I treasured those pics! It gave me hope for some professional photography for 2014.

This year rolled around and we thought it was going to be AWESOME. At three, the Little Mister is learning more and more about Christmas and Santa. We told him we would go to see Santa at the shops for a few days in advance (to build the excitement and let him be mentally prepared) and it seemed perfect that Mr Unprepared had a week day off work, so he could share in the moment. It wouldn’t be too busy at the big shopping centre and the Little Mister seemed excited. We got in line and he was happy, wearing his Christmas themed T-shirt and all. We talked about how we’d get some photos and to say “Hello Santa” and tell Santa what he wanted for Christmas (Wiggles DVDs were at the top of his wish list…that day anyway). The people in front of us had their photos taken and the Little Mister seemed really eager to get to the front and greet the jolly fellow in red (we had to hold him back). When his turn finally came…

…he got so shy and he froze and looked on the verge of a freak out! He was given a little toy and we bowed out yet again! Nothing to see here!

It was a little bit of a bummer, but we didn’t force it. Poor kid looked mortified with himself all the way home (we’d told him it was OK if he didn’t want to sit with Santa but he still looked disappointed in himself, bless him). When you think about it, we’re asking our kids (the wary ones anyhow) to go against their instincts! We’re telling them to sit in the lap of a strange man whose identity is quite concealed and have the event photographed! Not to mention, he stalks you all year, then breaks and enters every Christmas Eve, eats our treats and he can be a little on the judgemental side – naughty or nice lists anyone? It’s a little odd, when you really think about it haha. Of course, it’s all innocent fun in the spirit of Christmas (such magical memories to be made) and we know that as adults, but I guess some children aren’t so sure and I can live with that.

Do your kids like visiting Santa at the shopping centre? Any funny/crazy stories to tell?