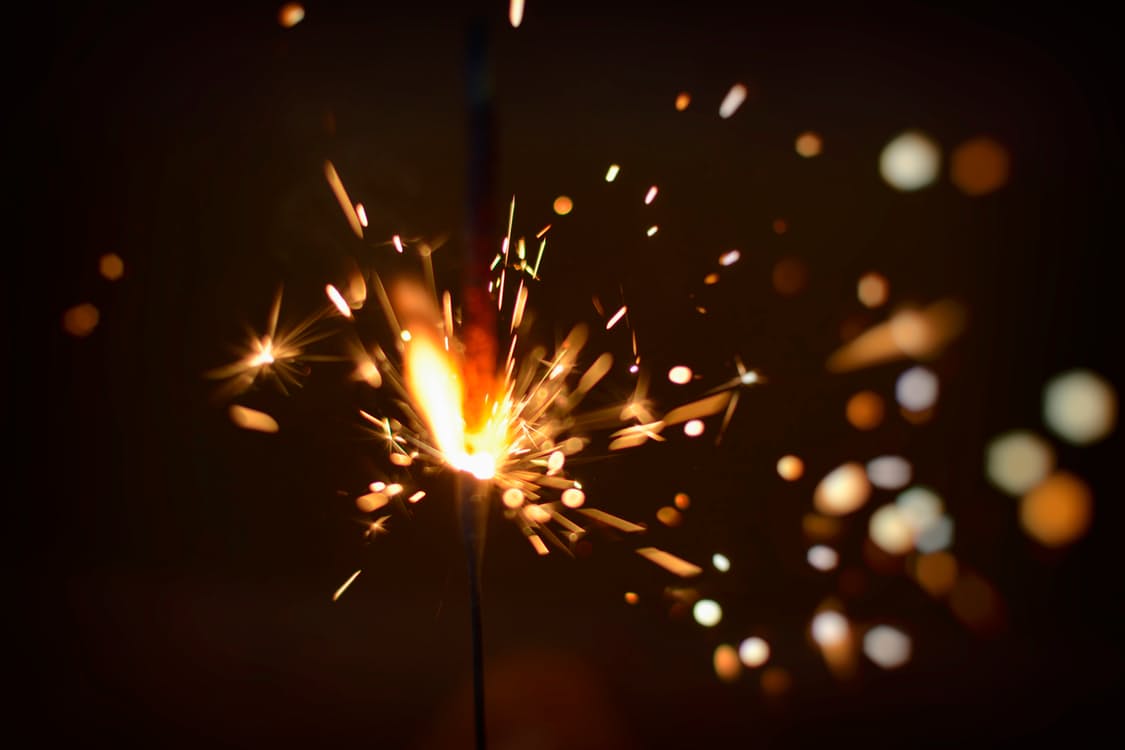 2016 and I have had quite the relationship. If I had to make it Facebook official, I’d be selecting “it’s complicated” as our relationship status.

Because there have been aspects of it that have sucked, but if it hadn’t sucked I might not have had such a good year. Are you confused yet? Like, on the one hand, I want to say this was the worst year ever. But on the other hand, I feel like I really had some amazing break throughs and adventures. I feel like I can’t completely write it off.

OK, so maybe it was just one thing. It really really sucked to not be able to conceive a sibling for the Little Mister. Honestly, most things that sucked about my year stemmed from this. I estimate that I had blood taken from me at least 36 times (not including that month I was completely drained of everything having blood tests almost every second day of my cycle or the extra times we needed to be sure of something or when I had my initial standard tests when we decided we needed to get help). Yep. 36 times were just the routine blood tests. Routine. I hate that fucking routine. Some of those tests may have been late 2015 but I can’t be bothered fact checking right this second. I had a lot of blood taken, OK?

I also had at least 12 internal ultrasounds (you know what ‘internal’ means). Yep. It’s a pretty all-up-in-your-bits, confronting experience. Especially when most of the time, the results show it was a waste of time.

I had surgery. A laparoscopy/hysteroscopy. It was nerve wracking. I was sick a lot through winter – so much more than usual. My immune system was so screwed up and I really think it had a lot to do with all of this. 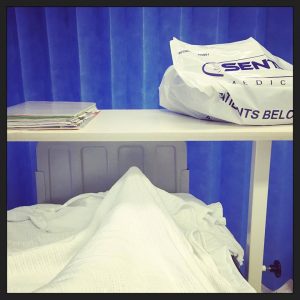 Maintaining some of my friendships proved really difficult. It was so hard to commit to things when you knew your period would/might arrive and wreck everything (and I’m not talking ‘normal’ periods – I’m talking hellishly heavy ones) or you’d be scheduling last minute doctor appointments and scans, all dependent on what your body decided or not decided to do at any given time. Or when you were sick all the time. Or when you’d had awful news and you were feeling so down that you just needed to curl up in a ball and have a brief pity party before summoning up as much resilience as possible to be able to get back up the next day. Some people bothered to ask about it and understood and showed me they were there no matter what, some people stopped checking in. I had to make some tough decisions to allow myself to stop feeling eternally guilty or left out. Or hurt.

Look, a lot of women go through this shit (and much worse). I hope I haven’t come across as totally melodramatic. While it has been an emotionally awful time, it did just become part of a routine and I did get on with it. What choice did I have if we want what we want? I guess, after two and a half years it starts to wear thin. I hope 2017 will be kinder in this aspect of my life.

Here’s the stuff that was good…

I had friends who really pulled through for me. I also learned how to develop friendships on my own terms so I didn’t always feel like I was at everyone else’s mercy when times were tough (the FOMO was strong in this one). I had friends who took the time to announce their pregnancies to me in the most heartwarming, kind and compassionate ways. I felt honoured to be told the way I was and so thankful for their kindness. I hope if you’re reading this, you know who you are.

I found friends who stuck it out with me through the infertility stuff, who never judged when I felt down or couldn’t be there as much as I wished I could, and who comforted me even though I imagine they understandably didn’t always know what to say. You tried and you were there and I cannot thank you enough. You helped me to realise I’m a good friend still too – some things/people led me to be so damn hard on myself, but because of you I am learning to let go of that.

I finally swallowed my pride and joined some online support groups for secondary infertility. Finally, I was talking to people who had been through the exact same stuff as me. I have also found other groups with some of my blogging type friends, where I can just be me (even about the stuff that can’t be blogged).

I found strength inside myself that I never knew I had. I wish I didn’t have to exercise it so much, but I would never take it back! I even became a bad ass comic book super hero, thanks to the love of my fave arty friend, Em. 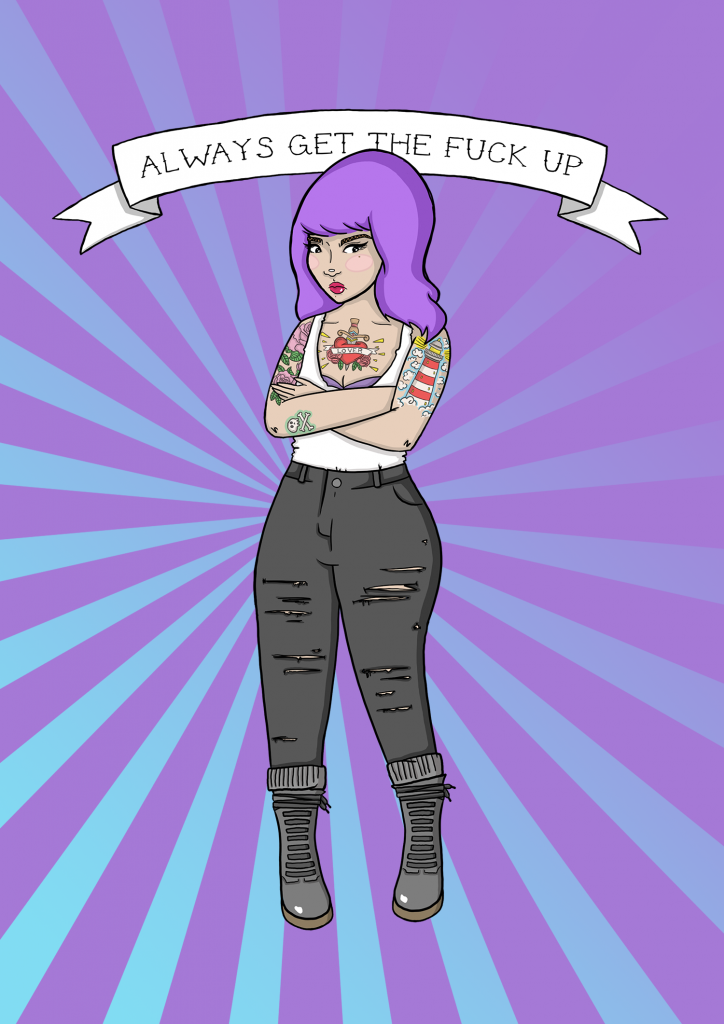 She has purple hair because I feel like you can’t not kick arse in life if you have purple hair (I dream of actually having purple hair – she’s a bit aspirational haha). Ripped jeans? Check. Lighthouse tattoo (to symbolise so many things but mostly keeping myself and my family safe but also radiating light) and a big heart tattoo, because through all of this I want to remain open hearted and be a lover of life.

Em? You are amazing. Talented. Kind. I shall hang this in my (STILL not completed) office so I can see it every day. She/me symbolises those moments when I am struggling but then I remember I am tougher than anything that is thrown at me and I get the fuck back up. It’s probably a little weird but I have genuinely imagined this ‘hero’ every time I’ve struggled – she’s been so helpful. I highly recommend getting yourself made into a comic book hero (and I’m not even usually into that stuff!)! Hey, whatever works!

I had to ditch a lot of fear and stress. I lost a few kilos (the stress weight I’d added by eating my feelings) and I started living healthier.

I became a school mum. It was nerve wracking at first and I felt awkward and like I just did not have my shit together for half the year (at least) but I made it to the end of the year with a Little Mister who has grown so much in so many ways (I love that kid so damn much). I don’t feel so scared anymore. I feel a lot more settled and I feel like myself again. I think I’ve got this (ha – we all know I’m speaking too soon).

I went on a few adventures too. I said yes to things I would have hesitated to do in the past. The best way to keep my spirits up was to change the scenery – have a little respite. Sure, I wasn’t getting pregnant, but I did not want to stop living my life. I might have felt like I was walking around with a big hole in my heart, but I filled my life with positive things – things I might not have done if I was pregnant. It was not a perfect consolation (nothing is) but it was all a wonderful distraction and a way to make the best I could out of the situation I was dealing with. 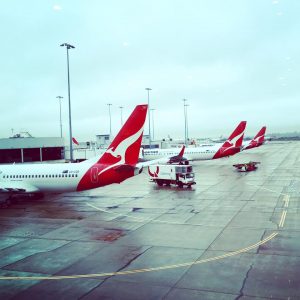 I went to Sydney, Melbourne, camping in Kalbarri, camping in Augusta, saw Josh Pyke twice, Bob Evans once and I fulfilled my teenaged dream of seeing Unwritten Law! We grabbed life by the you-know-whats and had so much amazing quality time as a couple and as a family. I said yes more but to the things I ACTUALLY wanted to do. No regrets! 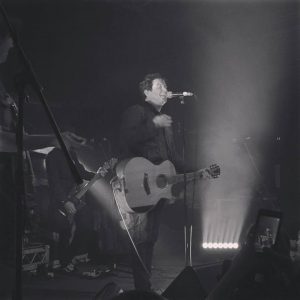 My friend Alice moved to WA to be with my other friend Trent – I cannot say enough about how happy that has made me!

I had the courage/good fortune to go after a working life that makes me happy and fits in with my crazy life. I have jobs that fulfil my creative side, my love of good grammar and my ability to wear whatever the fuck I want at the office. I am grateful for the opportunities that I have been presented with. I like being a working mum (most of the time) and I am grateful that I can work flexibly, which helps me to overcome so many logistical challenges. My confidence has grown (after I had been out of the work force for a while) and I am excited to see where my professional life takes me.

I don’t know where 2017 will take me. I really hoped 2016 would bring me a baby or a pregnancy. I really thought I’d feel settled and more content. I guess I hope the same for next year (but with a few more adventures thrown in). I think I’ll be braver and I think I’ll be brighter. I do feel like 2016 shook everything up and put it back in the place it should be, all ready for next year. I just hope that fate comes to the party. I know I said that at the end of 2015 but shhhhh. I can’t help but be optimistic, even a little bit. Bring it, 2017. I hope that all of my loved ones have a good year too.