This post has been inspired by Fat Mum Slim’s September Photo a Day challenge. Today’s prompt is ‘Father’ x 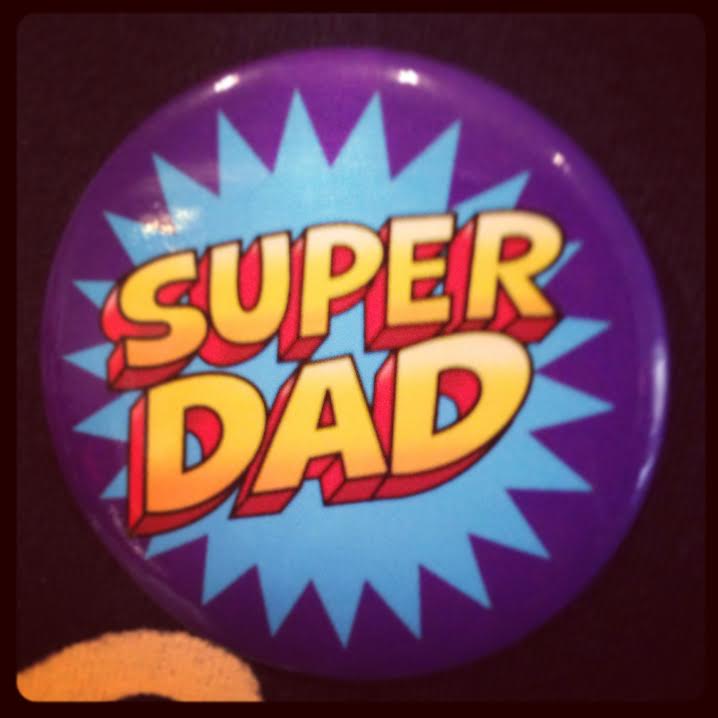 Today is Father’s Day and as I sit here, my belly and my heart are full after we hosted lunch for my parents and grandparents. The photo above is the badge/button that the Little Mister gave Mr Unprepared for Father’s Day (which he has worn with pride on his shirt all day). It came with a Super Dad themed card, which he’d decorated with crayons and requested that it be addressed to Super Daddy, love Super *Little Mister*. The Little Mister loves Superman. He doesn’t know much about him, except that he wears a cape, can fly and is big and strong because he eats his vegetables (*ahem* parental brainwashing at its finest). Still, he loves Superman. And he loves his daddy. He truly thinks he’s super.

Last night Mr Unprepared was instructed to stay out of the way because we had secret business to do. We needed to wrap his gift and write in his card. Later that evening, the Little Mister’s secret keeping skills were put to the test.

That was also the moment when the Little Mister noticed his dad has underarm hair but we won’t go into that haha.

This morning, the Little Mister brought Mr Unprepared’s present and card to him in bed.

It was still wrapped. Doh haha.

“What is it?” Mr Unprepared asked, with a glint in his eye.

“A book! With lots and lots of pictures in it!”

Must teach him about surprises a little better haha.

That’s OK. It’s a tradition and Mr Unprepared probably knew what he was getting. Each year since the Little Mister was born, I’ve created a big photo book filled with pictures of the Little Mister for the previous year. That is from the Father’s day gone, to the present Father’s Day.

As we looked through it together, I realised just how many gorgeous pictures I had captured of my two Misters together (one big and one small). How many moments over a year where Mr Unprepared had given the Little Mister his time and shared so many unforgettable moments with him. The proof right there as to just how involved he really is and how much he loves the Little Mister as we make memories together as a family. I see the way they look at each other. It’s just beautiful. That’s my number one, absolutely favourite thing about him (besides the fact that he looks hot when he wears a beanie and lets me force him into watching romantic movies sometimes). Hands down.

The Little Mister loves him so much too. Even if he doesn’t always admit it when Mr Unprepared tries to kiss him when his face is all stubbly and prickly.

As for my dad, I’m so lucky to have had such an amazing role model in my life, working well in tandem with my awesome mum. He does stuff for work that a lot of people would not dare to do – all because he cares. He handed down his love of dad jokes to me and he’s always got some pretty good advice for me – everything from the emotional/psychological stuff to the practical. And when I make fun of him just because I can? He takes it all with a laugh and a great sense of humour.

And Gramps? He’s just great. A real character. He’s 90 next week and I feel so fortunate to have him around. If my dad knows dad jokes? He knows granddad jokes and let me tell you, they are much much worse and I love it. Gramps gave my brother and I movies like Mary Poppins, Chitty Chitty Bang Bang and The Magnificent Men and their Flying Machines. He gave me impromptu maths lessons when I visited as a kid (OK so I didn’t love that so much)! He’s got a crazy Welsh accent. It’s so cool.

Do you have some super dads in your life? What do you love about them?

While I am feeling pretty fortunate, I also send my thoughts to those who can’t be with their dads this year and those good dads who cannot be with their children too x