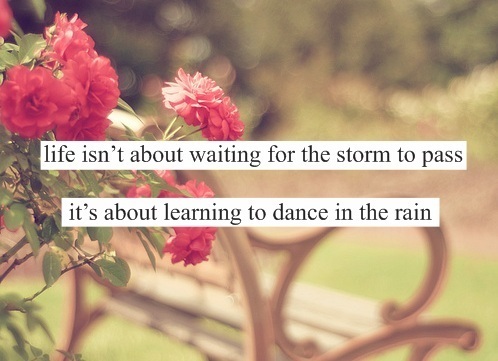 So, we’ve had a recent bout of stormy weather in my corner of the world the last week or so. In other parts of the country, hell even in other countries, this would just be something that I imagine you hardy people would just take in your stride. However, where I live this kind of weather (or any weather at all) is just unheard of and we all lose our minds.

We like to think that we live in an eternal summer where all we need are shorts, tee-shirts and a bit of sunscreen to protect us from the elements all year round. As soon as it rains, we freak out. We drive either really really slow (without our headlights on) or we speed up (without our headlights on) because we’re rebellious: “I’m not gonna let this rain tell me what to do, dammit!” BAM. CRASH.

Or…we don’t leave our houses. At all.

“I’m not going to the shops today because it’s raining.”

“Gonna have to cancel our lunch date – rain.”

Granted, this week’s storms did actually give us something to worry about (I personally was quietly crapping myself in the middle of the night when the second one rolled in). People did lose their roofs or is it rooves? Why is my brain not working? They lost that stuff that sits on top of our houses and keeps us dry. That thing. They lost those. And cars, trees and fences. And I can’t be entirely sure, but I think people lost their cats too. I heard cats in the night and it sounded like they were flying.

I started to feel like the zombie apocalypse was finally arriving. There was a sense of excitement and electricity in the air (which is ironic because no-one had any electricity). Shops were selling out of generators and torches and dry food. People were lined up at MacDonalds as far as the eye could see so that they wouldn’t have to go home and cook in the dark on camp stoves. People were getting crazy at the petrol stations. GOTTA GET TO THE SERVO IN CASE THEY LOSE THEIR POWER AND I CAN’T GET FUEL! My gran even had to buy me a sandwich, because I didn’t have cash on me and all of the EFTPOS machines were down at one point. That’s gotta be a Category 1, Code Red right there.

Worst thing? I lost mobile phone service. I couldn’t charge my iPhone. My go-to boredom busting fallback was no longer available for anything except emergency calls and sparse tweets (priorities, people). People were driving to each others’ houses to check they were alive after the phones went down. Somehow we all had time to comment on the storm via Facebook, but that’s neither here nor there.

The local (almost derelict) shopping centre was shut due to lack of power…where I swear that just for a tiny instant everyone sighed with relief and thought, “Phew. Now I won’t have to go there for a while.”

I have to admit that the wind was very scary and loud. It made interior doors bang and rattle in my house. It whistled and swirled and shook everything on my property at least just a little bit. I LOST A POT PLANT. I lost a pot plant. I just typed that twice to emphasise the emotion that it deserves.

With no electricity I had to play with my Little Mister by torchlight and act like there was nothing different going on. Nothing to worry about. He looked at me a bit strangely, like “Dude – this isn’t right” but he played along. I bathed him in the dark (luckily I have gas hot water and not electric). I had to sleep near his room when the baby monitors weren’t working. He was a little trooper. On a more serious note, I did feel so much more responsibility than before. I had someone to protect beside myself now!

This stressed me the eff out. I won’t lie. But I stayed cool (on the outside) and I stayed strong. We survived the fallen pot plant of 2012. 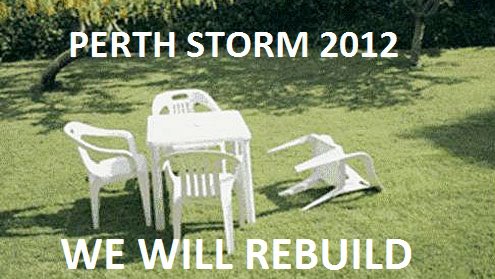 Pic: Viral meme on Facebook (appears to link back to someone called Kelly Pitman)

Here’s my advice to my fellow Western Australians.

Buy shoes. Real ones. You don’t need a lot. Just maybe one pair. Something to protect your feet from scary puddles and stuff.

Also, buy a jumper and a rain coat. I know it’s expensive and you might only need them twice a year, but one day you’ll really need them.You don’t want to catch a common cold. That’s just nasty.

Business owners: Provide heating, shelter, and somewhere for our wet umbrellas in the winter. Oh and electricity.

Drivers: Turn on your headlights when there is heavy cloud and/or rain. Drive to the conditions. Don’t freak out and do weird things. It’s just water.

In the case of power failure, calm down. It’s just like camping except you’re in your own house. Which is stronger than a tent. So you’re cool, right?

Also, if rain and wind were enough to stop a whole city – how would Melbournians survive on the other side of the country? Wind and rain are totally their thing. They just get on with it.