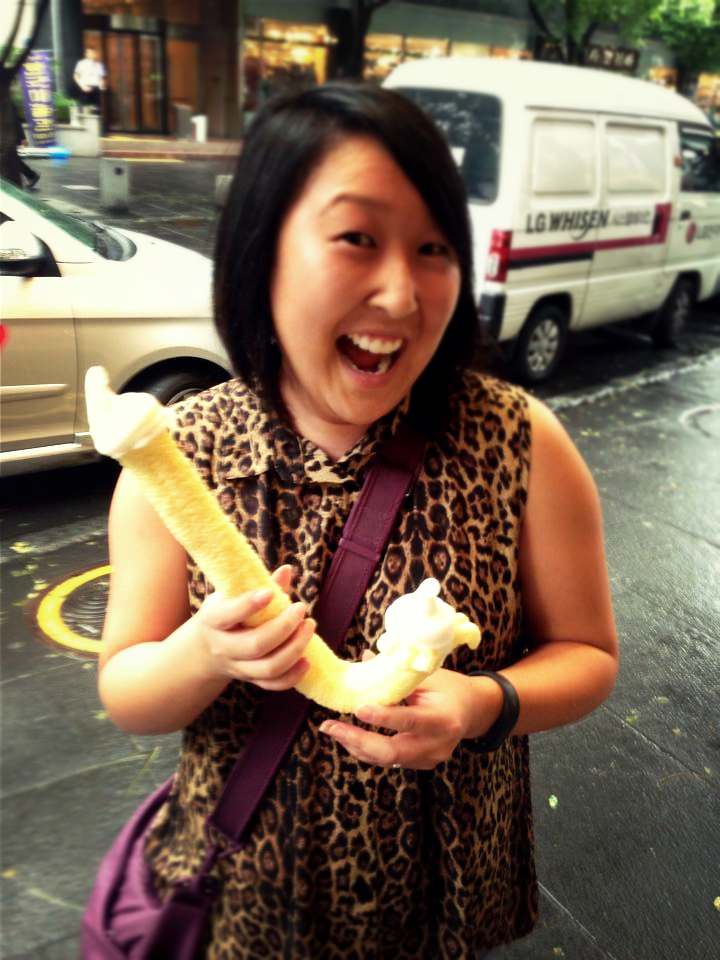 One thing that gave us a laugh in Korea was the great variety of creative street stall snacks. One favourite over there is a tube like ice-cream. It’s some kind of waffle-y cone with soft serve inserted at both ends and besides the fact that it looks ridiculous, it is frickin’ practical! Doesn’t drip. Ever. Which makes me suspicious about the ingredients that go into the ‘cone’, but then you are overcome with the joy of having a funny shaped ice-cream that doesn’t drip and you forget all of your worries. DOESN’T DRIP. LOOKS FUNNY. Who cares if it might sit in my stomach for five years? Mr Unprepared was over the moon with this culinary invention.

We had a ball when we got to Gangneung (where my brother was born). There was a massive festival on, along the river. It was a mass of noise and activity, with people everywhere! Market stalls went on forever on both sides of the river, filled with goodies. It was an intense experience, with cultural stuff to see – dancing and drumming, carnival style rides, souvenirs and just about anything else you can think of. Imagine the best ever weekend markets you’ve ever been to, then multiply all that by a million. OK, maybe not a million but maybe 999,999.

Luckily, the Little Mister slept through half of the experience, which is probably a good thing, because I don’t think he would have survived so much activity and excitement without a sleep!! 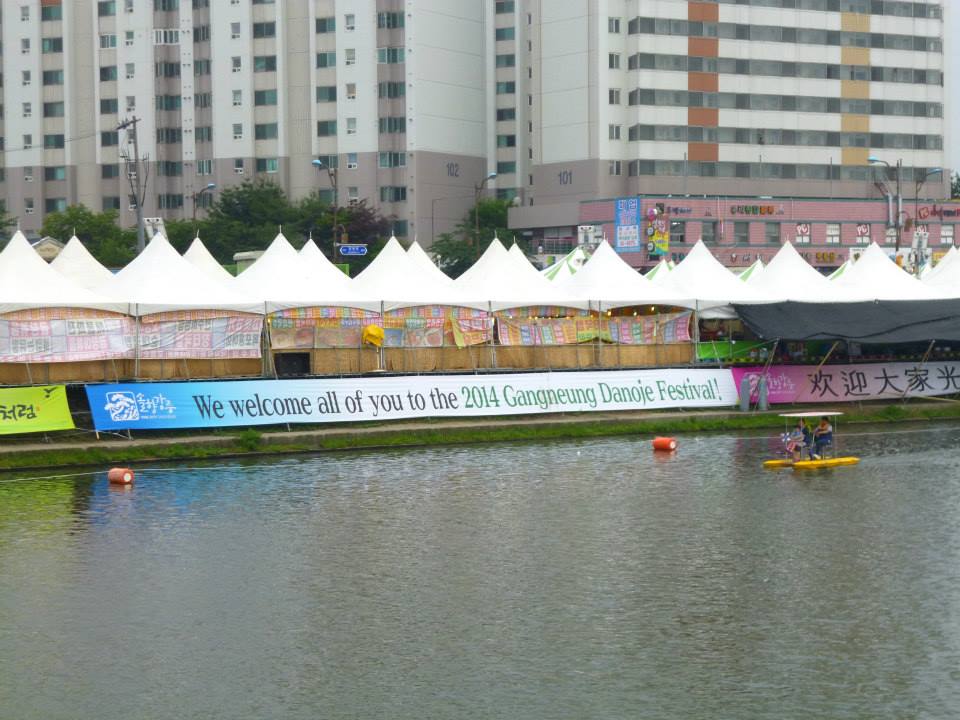 It was a huge privilege to experience this festival, as I do not believe many people outside of Korea would have even heard of it or would turn up just for it. We had heard that even some Koreans had not heard of the small city of Gangneung! It was definitely well worth it and probably a rather underrated tourism experience.

It had been a long day, with that first 6 hour train ride with a restless Little Mister and we’d almost literally put our bags down and headed straight out. I was a bit tired (as we all were) and the excitement even got a bit much for me, because I burst into tears when we watched some traditional drummers! They were whizzing around like crazy, the beat of the drums was really loud and you felt it in your body. They were grabbing people out of the crowd to join in and suddenly, I was holding back sobs! I quietly told my mum I was overwhelmed and moved away. I suppose it was a bit to do with my adoption and the fact that I’d grown up with a couple of little Korean drums and masks in my home. To see it all right there for real – IN KOREA – must have stirred something up in me. I felt a bit silly because this was the place my brother was born – he was supposed to cry, not me! Perhaps I had been holding my breath for him a little too. He was fine of course – the bugger. I got my act together pretty quickly (my mum hugging me lovingly might have set me back a bit “DON’T BE NICE TO ME – YOU’RE MAKING IT WORSE!” haha) and we went on to enjoy the rest of the craziness.

Mr Unprepared enjoyed a long-ffle. Now what’s that, you ask? It’s a long waffle. Duh. On a stick. Because everything tastes better on a stick. Name a food that comes on a stick that isn’t amaze balls. Yeah, didn’t think you could. 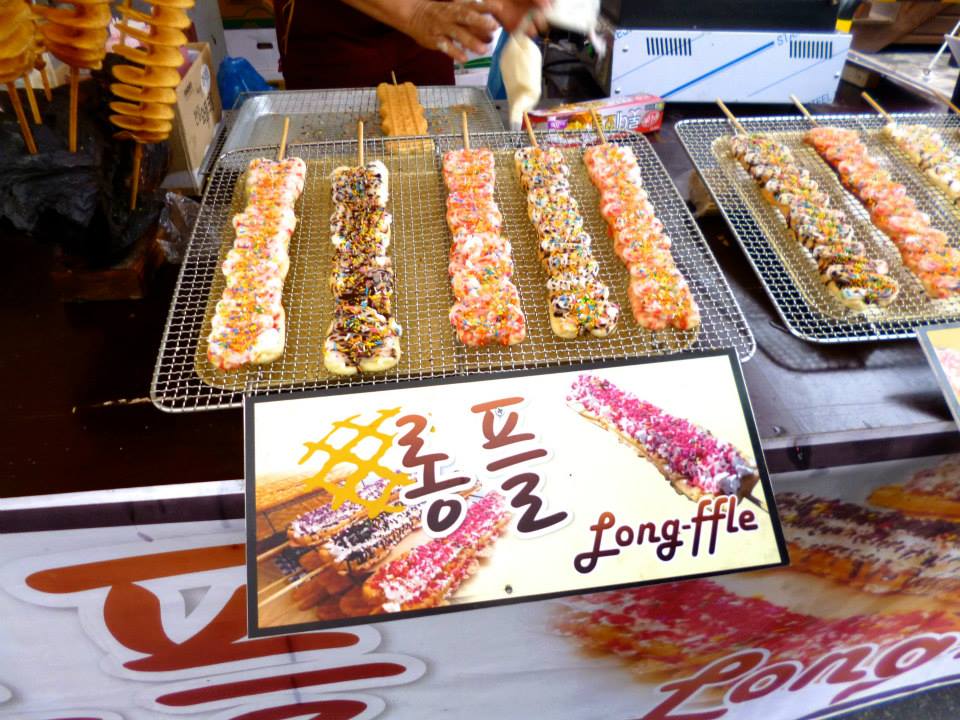 These long-ffles (such a creative name *giggles*) were covered in donut frosting and had sprinkles and sh*t. Best. Ever. And while I don’t have a photo that my dad would probably want me to put on the blog, he did enjoy a curly potato thingy (on a stick – of course). You can see it in the top left corner in the photo above. Basically, they shove a whole potato into this cutting device (looks like something you’d buy from a home shopping commercial), which turns it into one long spiral. Then they deep fry it. Then they dip it into a seasoning, which is weirdly kind of sweet and not salty like you’d expect. Hey, I’m not arguing with any potato related magical voodoo. It’s potato. It’s fried. It’s on a stick.

That evening we had BBQ pork at a market restaurant (which we ordered purely through miming and guessing and a sense of adventure), with beautiful views of the river…and the old men peeing off the riverbank. Such atmosphere.

Oh and a couple of cities later (in a back alley of my birth city Busan), I had an ice-cream that came in a waffle cone shaped like a fish. Awesome. 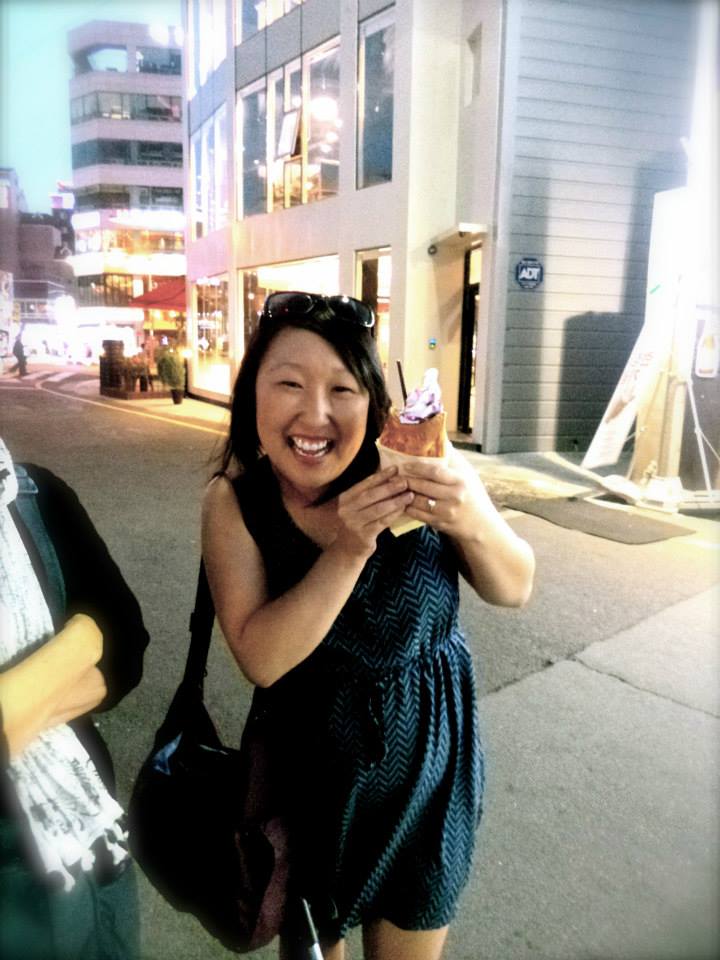