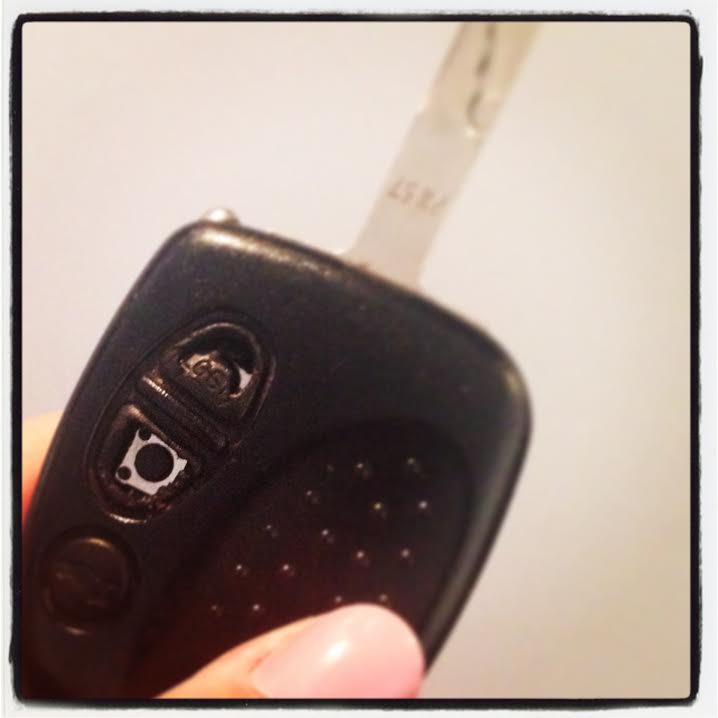 This is my car key. It’s not so flash. The buttons have disintegrated. Happens all the time. At first I thought it was because I was digging my nails into them by accident and I felt a bit bad about it, but over time (and conscious effort NOT to use my fingernails to push the buttons), I have begun to realise that they’re just stupid buttons that were clearly not even designed for fingers to push them over the full life of a car. The later models all have flash, new and improved keys and I could probably just ask for a new standard key at the dealership, but it would cost a lot (in proportion to the age of my car) and I really can’t be bothered, to be honest.

The key still works, if I (ironically) dig my nails in and I just get on with my day. I’m sure that at some point my luck will run out and I’ll be forced to replace the key, but until then, I’ll make do.

Besides, what my key looks like means nothing to me when I invariably run around the house at the last minute, yelling out, “Where are my car keys?! I can’t find my car keys! We’re going to be late!”

Seriously…WHERE DO MY KEYS GO?

I have a theory that they become invisible whenever I’m in a rush.

We have a handy hook for them and when they’re not on the hook (probably this is the problem), they are usually in only 3 other places, which I will not reveal because I am a paranoid freak. Just imagine where you keep your keys and I think mine are probably in all those usual places too. Also, now that you know this, please do not come and steal my car. It’s not really that good of a steal. The cars across the road are much nicer and newer. OMG why are car thieves reading my blog?? And please don’t steal our neighbours’ cars. I was kidding.

And don’t hijack people, because that’s so not cool. It happened around here recently and it’s a little unnerving. So if you’re a car thief, hijacker reading my blog, don’t do it. Make better life choices. Just sayin’.

…And Kez has lost the plot.

Have you ever owned/bought something that didn’t last as long as it should have? AND DON’T TELL ME WHERE YOU KEEP YOUR KEYS. THE THIEVES ARE WATCHING.