I thought that just for funsies on Halloween, I would share with you a story I was reminded of today while going through my Facebook memories. I think I might have shared this in a previous blogging life…

Anyway, it was 2009 (BC – before children) and my family was visiting Hobart, Tasmania for a holiday. The main purpose was to catch up with my relatives. We travelled there often. Sometimes it was difficult to find accommodation for us all and my mum had found a seemingly charming house for us to stay in together as a group. 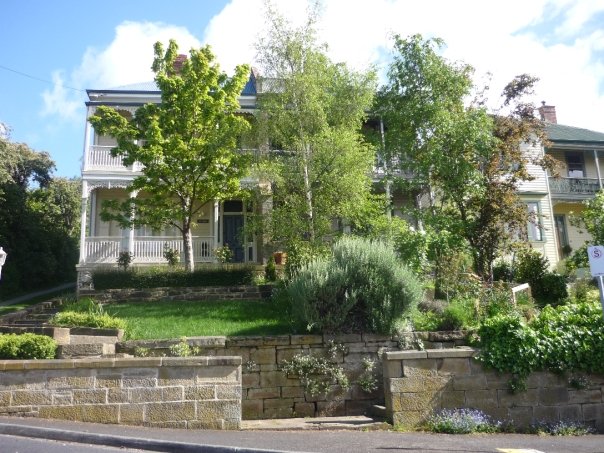 Cute, right? The gorgeous verandah and balcony. The pretty garden. A new kitchen and bathroom extension. Wonderful! Hobart can be very pretty. Even as I type this, I kinda miss the harbour side city! We haven’t been back there since my grandparents passed away a few years ago.

Anyway, we arrived at this place as night was falling and we had a little wander around. It didn’t look too bad upstairs! The kitchen looked quite new and the bathroom off the side of it was the same. So far so good! It wasn’t until we wandered downstairs that it started to feel a little creepy. There was a den with a fireplace and a chess set. There were some board games stacked in a basket, but it felt like we’d stepped into a time machine. We were in the olden days! I think my husband, brother and I even made a stupid passing joke about ghosts or something. We didn’t think much of it. It was just an old house (I guess we don’t have as many of those where we’re from). It was just dark and we were being silly. We shook it off but decided not to hang out in there long…

There was an older bathroom under the stair case. A bit dingy but OK. My husband and I were to sleep up in a little loft. I think we had to climb a very sturdy little ladder type stair case to get to it? The roof, with its exposed beams angled down over our bed. It seemed cosy enough. Ordinarily, I think lofts are pretty cool!

We stayed there a few days and had a wonderful time, catching up with my aunties and uncles and my grandparents. We probably did the usual Tassie type things. Driving up The Mountain (Mt Wellington), laughing when Tasmanians called the rest of Australia “The Mainland”, shivering in the cold, checking out a boat that somebody built, eating scones with jam and cream, and visiting the Cascade Brewery.

Only thing is, I had a very vivid nightmare/vision one night while lying in bed. It was around midnight. I felt this immense feeling of sadness and distress as I watched a woman in an old fashioned, slightly filthy nightgown hang herself from the beams right above my head. I felt like a man was involved. Like he had made her upset and/or had found her there or something – the detail on that was fuzzy. Either way it was so real I still feel creeped out it if I think about it too hard.

I must have dismissed it as ‘just a bad dream’ and totally played it cool for the rest of the holiday. I don’t think I even mentioned it to my family for a few days (which was unlike me – any chance I get to bore my peeps with stories about my crazy arsed dreams and I’d take it haha).

It wasn’t until we were almost leaving that I found out my mum (usually a sensible and no nonsense rock in my life) had refused to go to the toilet (the one under the stairs) in the middle of the night without my dad escorting her. That had me amused and shook! She was probably playing it cool for the rest of us so we didn’t let our imaginations get away from us! What she didn’t know was that I refused to use that bathroom in the night also! I’d been sneaking upstairs to the newly added facilities next to the kitchen because there was no creepy feeling there! We laughed when we realised we’d been feeling the same.

Anyway, as they were checking out with the owner of the accommodation, my parents cheekily asked, “So what’s the history of this place?”

They reckoned the owner looked at them sheepishly, like they had a feeling they knew why the question was being asked! It turned out that the place was once a brothel that was then a bit of a dilapidated drug den of sorts (some time around the war? I can’t remember exactly) before it was restored and renovated, I’m guessing.

Suddenly it all started to make sense.

We had just enjoyed a creepy holiday in a haunted brothel!

Have you ever stayed somewhere that’s haunted? I want to know EVERYTHING!